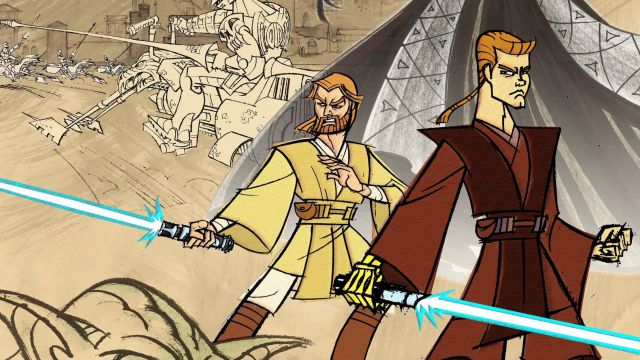 The movies starring the Ewoks are also scheduled for release, which will be posted during that month. At the Disney + premiere, Star Wars fans spotted several major absences.

One of them is the Clone Wars 2D animation series, prior to the three-dimensional version. This fiction, which has two seasons of short episodes, will premiere on April 2 on Disney +, but it will not be the only product related to the galactic saga that will debut that day. So will products starring the Ewoks, the likable (and controversial) characters that were introduced in Episode VI, Return of the Jedi.

The Clone Wars premiered its 25 episodes on Cartoon Network. It is a series with a very peculiar artistic style, the work of Genndy Tartakovsky. It is a work that introduces some of the characters that were later used in the three-dimensional series, by George Lucas himself and Dave Filoni. However, the 2D series is no longer considered part of the Disney canon, so the stories that are raised do not fall within the official chronology.

A short with Boba Fett

It should be noted that along with the Ewoks movies and series, Boba Fett will make her return before the premiere of the new Disney + series. The Story of the Faithful Wookie is an animated short designed for the 1978 Christmas Special, a product Dave Filoni and Jon Favreau also noticed, as one of the weapons Boba Fett wields in The Mandalorian was taken directly from that short.

The future of Lucasfilm will be reinforced with new series and films. Among the new additions that will be added soon is Star Wars: The Bad Batch, which will begin airing on May 4. The series takes place after The Clone Wars, in the early stages of the new totalitarian rule of Emperor Palpatine. The defective clones that we met in the seventh season, La Remesa Mala, will be the protagonists.