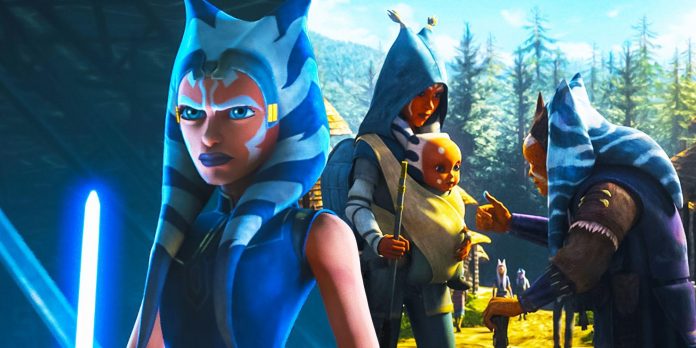 The upcoming animated series “Star Wars: Tales of the Jedi” will examine two key force-sensitive characters from the prequel era of “Star Wars”, which will potentially improve (or harm) the story of Ahsoka Tano. Using the CGI animation style of the films “Star Wars: Clone Wars” and “Star Wars: The Bad Batch”, “Tales of the Jedi” will tell the stories of the prequel era about Ahsoka Tano and Count Dooku, each of whom becomes the main player during the “Clone Wars” from “Star Wars”. and chooses a completely different path after leaving the Jedi Order. Episodes of the series dedicated to Ahsoka could easily enrich her history of the Clone Wars era by preparing viewers for her live TV series, but they can just as easily weaken them.

Ahsoka Tano’s popularity has grown steadily since her debut in The Clone Wars. Despite the fact that Ahsoka brought carefree heroism to the Clone Wars and positively influenced the characterization of Anakin Skywalker, many viewers, unfortunately, did not accept Ahsoka well at first. However, as her character developed throughout the series, Ahsoka gradually became a fan favorite character, whose later appearances in Star Wars: Rebels delighted viewers. Ahsoka finally made her live debut in the second season of “Mandalorian” and, in addition to appearing in “The Book of Boba Fett,” will play a major role in the upcoming series “Star Wars: Ahsoka” for Disney+.

One episode of Tales of the Jedi, “Life and Death,” was shown at the Star Wars Celebration in Anaheim in 2022, and in it Ahsoka was depicted as an early child on Shili before joining the Jedi Order. Ahsoka’s next two episodes are still unknown, but they may explore her days as a Jedi initiate and possibly the untold story of the early days of the Clone Wars. The stories of the Jedi about Ahsoka can be used to create the image of Ahsoka in the upcoming series “Ahsoka”. In an unlikely scenario, it could also negatively affect her upcoming performances.

One of the most obvious ways in which “Tales of the Jedi” can improve the story of Ahsoka Tano is to include her story in the Ahsoka series. It is almost confirmed that Ahsoka will continue to search for Ezra Bridger in the series, probably also face Grand Admiral Thrawn, but Tales can add even more to this by introducing new characters and concepts that will reappear in the Disney+ series, tying into Ahsoka’s story of the Clone Wars era. A more subtle approach may be to simply introduce thematic elements that will later be involved in Ahsoka’s story on Disney+.

The easiest way to complement Ahsoka’s story is simply to tell untold stories that go back to her earlier days, reminding viewers why they like this character in the first place. While the first episode of Ahsoka’s “Tales” will tell the story of her time on Shili, one of her “Clone Wars” era episodes may simply involve her fighting alongside Captain Rex and Anakin Skywalker, causing longtime “Clone Wars” fans a fair share of nostalgia for the series. early episodes. Tales may even explore some untold stories shortly after Ahsoka’s departure from the Jedi Order, reusing concepts designed for the Clone Wars themselves.

Why the animated series “Star Wars” may be bad for Ahsoka

While it’s unlikely that Tales of the Jedi will damage Ahsoka Tano’s story, especially since it was written by Dave Filoni, there are some pitfalls to avoid. For example, with the anticipation of Ahsoka’s upcoming narration in her Disney+ series, Tales may be tempted to tell perhaps too much about her plot twists, potentially spoiling some elements of Ahsoka. The too early appearance of concepts such as the “World Between Worlds” from “Star Wars” can also damage Ahsoka’s appearance both in “Rebels” and in her series on Disney+, so it is necessary to associate her episodes with Ahsoka with great caution.

Another problem to avoid is repeating the arcs of Ahsoka Tano’s characters, whether from the Clone Wars or the upcoming Ahsoka series. A big part of Ahsoka’s appeal is the development of her image from her introduction to The Clone Wars to her recent appearances in The Mandalorian and The Boba Fett Book. Although the characters of “Star Wars” to some extent really have to learn the same lessons more than once, in “Star Wars: Jedi Stories” it will be necessary to avoid departing from the character of Ahsoka Tano, especially when revisiting her adventures in the era of the Clone Wars.

15 TV shows that are worth watching after I finish “Love...