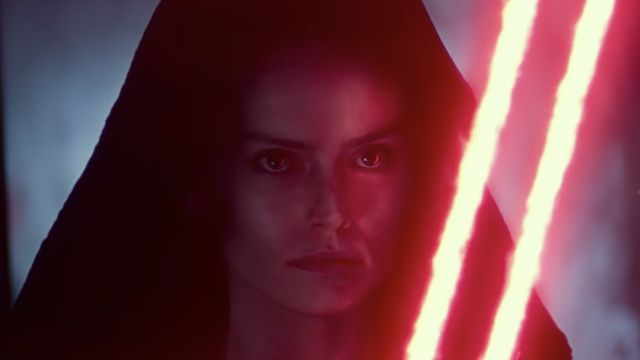 Star Wars: It is an official piece of The Rise of Skywalker, the film that closes the entire original story arc.The relationship between Emperor Palpatine and Rey is revealed in the most recent cinematic chapter in the saga, Episode IX. In a scene that takes place in Darth Sidious’s old throne room, the young Jedi sees herself reflected as an entity of darkness. Now a discarded concept art from The Rise of Skywalker has come to light, portraying her in the city of Coruscant, which was the capital of both the Republic and the Galactic Empire.

This image shows the dark Rey in the big city, surrounded by ashes. Its author, the artist Adam Brockbank, recognizes on Instagram the influence of Lady Galadriel from The Lord of the Rings. The character appears dressed in white, with hair of the same color, all in contrast to the color of her eyes, more reddish. In another image, he presents one of the initial arts, in which she is seen with a red lightsaber.

Palpatine wanted to go back

Star Wars: The Rise of Skywalker is the ninth film in the main saga, the one that closes the most current trilogy. The story continues after the events narrated in The Force Awakens and The Last Jedi and takes on a darker tone when it is discovered that Palpatine, believed to be dead, has survived using the dark arts. In the shadows, in his lair on the planet Exogol, he has been hatching a plan for years to return as emperor of the old Galactic Empire.

Lucasfilm continues to delve into the historical period of the Skywalker saga, but through other products such as The Mandalorian, the first live-action Star Wars series. The character of Darth Vader will reappear on screen with Obi-Wan Kenobi, the six-episode miniseries that will reunite Ewan McGregor and Hayden Christensen.