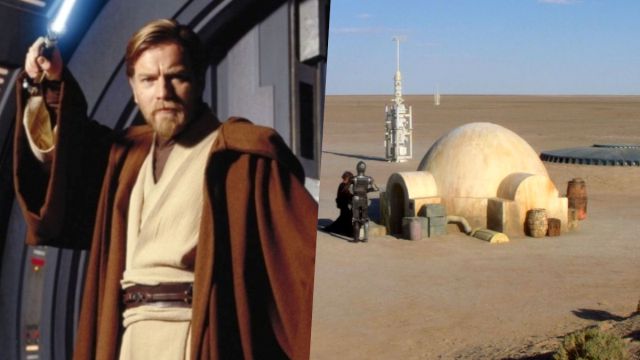 Star Wars Obi-Wan Kenobi: The new Disney + series will begin filming this April, although it still has no release date.Obi-Wan Kenobi did not spend his last years of life as a hermit, at least he did not during the entire period that he lived on Tatooine. Anakin Skywalker’s teacher will return with his own limited series, a fiction in which Ewan McGregor will once again play his character. Lucasfilm recently announced the full cast, as well as the start date for filming, which will begin in April. Therefore, it is not surprising that the first images of the set have been leaked. Now, an important location from the Star Wars saga and the Skywalkers in particular has also come to light: the Lars’ farm.

Since we first saw her in A New Hope, the farm has been closely tied to the Skywalker family. Shmi, Anakin’s mother, married Cliegg Lars and started a family. Her death did not break the bond, as after Darth Vader emerged from the dark side of the Force, her son Luke was raised by Owen and Beru Lars. Knowing that the emperor would seek out a Force-sensitive child, Obi-Wan Kenobi takes it upon himself to ensure his safety. Meanwhile, Leia is in charge of his adoptive parents, Senator Organa and his wife.

Star Wars: Obi-Wan Kenobi takes place a decade after the events narrated in Episode III: Revenge of the Sith. Hayden Christensen will return to the galactic universe to get behind the mask of Darth Vader. Beyond that, no details about the synopsis have transpired, so we will have to see the stories they tell us. The showrunner is none other than Deborah Chow, a director who has directed several episodes of The Mandalorian.

The premiere of the series will take place on Disney +, although there is still no date for its premiere. Before all this, viewers will have the opportunity to enjoy Star Wars: The Bad Remittance, a new animated series that continues the line of The Clone Wars. Additionally, The Book of Boba Fett will debut in December.

13 Sentinels: Aegis Rim is Coming To Nintendo Switch in April...

The Lord of the Rings: The biggest problem the Amazon series...