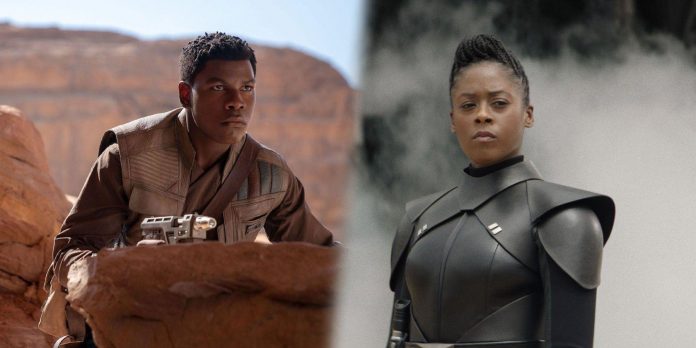 Unfortunately, the reality is that a large number of actors and actresses of “Star Wars” have been subjected to really reprehensible personal attacks from “fans” over the years simply for the fact that they exist in the franchise, most recently Moses Ingram. They are often intimidated and humiliated to such an extent that they have no choice but to retreat from public attention for the sake of their own safety and mental health. In the case of John Boyega, he fought back and used sarcasm as a starting point for activism.

Boyega, who played Finn in the Star Wars sequel trilogy, spoke candidly about how he was treated by both fans and the studio. Therefore, it is not surprising that he had some thoughts about the racist attacks of unreasonably angry viewers directed at Obi-Wan’s actress Kenobi Ingram. Boyega recently spoke about this issue (and others) on SiriusXM’s “Tell Me Everything with John Fugelsang” program, giving a surprisingly charitable assessment of the situation, and it has a lot to do with how Disney handled it all.

“When Moses Ingram is protected, I feel protected. Do you understand what I’m talking about?” said Boyega. “It makes me think, ‘OK, cool. I’m not the elephant in the room.” Because when I started, it wasn’t a conversation that could be brought up. You know how they got through it. It was like, “Let’s just be quiet.” It wasn’t a conversation you could bring up. But now to see how blatant it is, to see how Ewan McGregor came and supported… for me, it fills up my time when I didn’t get support.” Given Boyega’s frank discussions about races in Star Wars, as well as how important they are, this is certainly an interesting development on his part.

“It doesn’t bother me at all,” he continued when asked about his feelings for Ingram, who received protection he didn’t receive. “Sometimes it seems to me that you are the guy. And my father taught me that. You cannot enter, you force others to enter. And that’s where you get your happiness from. And for me to see how other people are accepted, and at the same time to see that the studios are now like, “OK, cool. This is not a conversation about elephants in the room. We need to support our black client.” It’s unbelievable.” The metaphor of Moses seems particularly appropriate.

However, some fans may be unhappy with what he said next. When asked if he was ready to return to the role of Finn in future Star Wars projects, Boyega made his position pretty clear. “I think Finn is at a good confirmation point where you can just enjoy him in other things, games, animations,” he said. “But I feel like from [Episode] VII to [Episode] IX I felt good.”

If anyone deserves a peaceful exit from Star Wars, it’s Boyega. He’s been the target of racist attacks from extremely disgruntled fans since the first trailer for The Force Awakens, so he’s definitely had more than enough. We hope that his career will remain as successful as before.

The Star Wars saga is available on Disney Plus.

Maddie Bram from Cheer hospitalized after being hit by a moving...