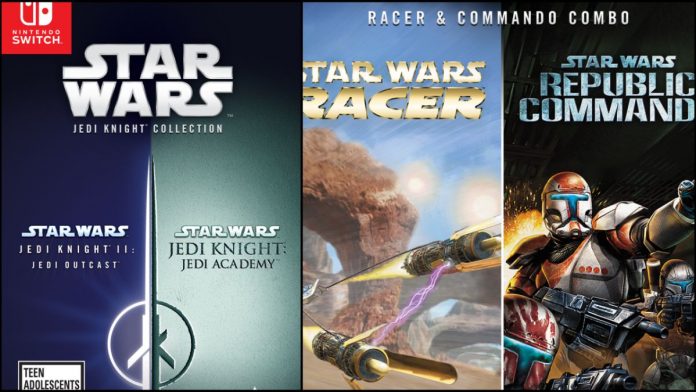 Star Wars Jedi Knight Collection: These two packs in physical format will include several classic installments of the saga at a recommended price of 29.99 euros each pack. Confirmed date. THQ Nordic and Aspyr Media have announced the release of two packs of classic Star Wars games for PlayStation 4 and Nintendo Switch in physical format. Star Wars Jedi Knight Collection and Star Wars Racer and Commando Combo will arrive this October 26 for the Sony home console (backward compatible with PS5) and on November 16 on the hybrid platform at a recommended price of 29.99 euros each.

The Star Wars Jedi Knight Collection and the Star Wars Racer and Commando Combo will include several classic installments now available separately today on the eShop and PlayStation Store; all of which Aspyr Media has been in charge of during these last dates. The difference is that they will now be collected in two packages in physical format, mainly aimed at collectors.

Aspyr Media, when asked about a possible distribution of these games in physical format for Xbox consoles, assure that “we have no information” about a possible publication on the North American platform. The digital format will continue to be, except for surprise, the only way to acquire them.

The future of the classic Star Wars saga now involves the launch of the classic Star Wars: Knights of the Old Republic for Nintendo Switch, which will be released this November, as well as that surprising remake for PlayStation 5 and PC that we saw in the September PlayStation Showcase. Apart from this, we know that Respawn Entertainment is working on the sequel to Star Wars Jedi: Fallen Order and that Ubisoft Massive has a production in hand that we know nothing about so far.