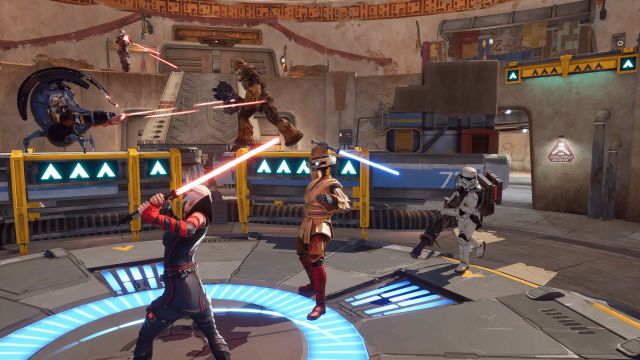 Star Wars Hunters: Zynga shares the first video showing the gameplay of its new multiplayer title based on Star Wars; available on Switch and mobiles in 2022. Star Wars Hunters, the new video game focused on multiplayer action in combat arenas based on Star Wars, shares its first gameplay trailer that you can see on these lines. This has been published by Zynga, sharing the first games with a small sample of gameplay of a title scheduled for next year on both Nintendo Switch and iOS and Android mobile devices.

Thus, Star Wars Hunters bets on team confrontations of four against four in combat arenas, with some of the characteristic characters of such a popular galactic saga. Among the characters that we can use are Jedi, imperial soldiers, bounty hunters, droids and many more. And thanks to this first gameplay we know some of the names that will be available, the so-called Hunters.

“The video shows the unique individual style of each combatant: Rieve and J-3DI showing off their prowess wielding the lightsaber; Zaina and Sentinel demonstrating their aim with the blaster; Imara Vex showing her arsenal as a hunter; the brute force of Grozz; the technology used by Slingshot and the ingenious weapons made by the Utooni ”, they tell us from Zynga.

Although Star Wars Hunters does not live on characters alone; and it is that the sands themselves will represent such iconic places as Endor, Tatooine or Hotn, among others. Players can now pre-register to reach new milestones that unlock new content for the launch of Star Wars Hunters through their official website.

Set after the fall of the Galactic Empire, Star Wars Hunters will connect players, in real time, to fight in arenas inspired by iconic Star Wars locations using teams of 4 players. For now is all we know about Star Wars Hunters, a new free to play in the saga that will arrive sometime in 2022.