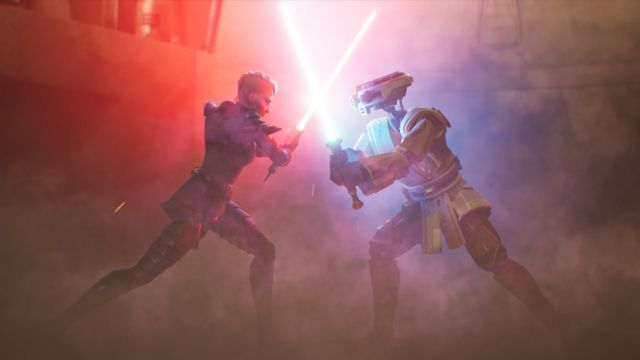 Star Wars: This multiplayer title is in development for Nintendo Switch and iOS and Android mobile devices and will be released in 2022. Apple’s annual big event traveled to the galaxy far, far away with Star Wars: Hunters, a new title developed by Zingya and NaturalMotion for iOS and Android mobile devices, as well as for the Nintendo Switch. The game, which will run under a free-to-play model, was scheduled for 2021, but will finally launch next year. A new cinematic trailer has been unveiled during the conference, but some gameplay has also been seen. You can see all this below these lines.

Lucasfilm Games has posted more information on the context in which the game will take place on the Star Wars website. In the trailer, we see some of the new protagonists: the warrior Rieve or the Mandalorian Aran Tal, who face Grozz, an imposing Wookiee who has as a hobby disarming droids. They promise that this competitive title will allow players to discover the planet Vespaara, while facing other combatants from factions already known in this universe.

The galaxy after the Empire

Star Wars: Hunters is set after the fall of the Galactic Empire, which means that it takes place after the events narrated in Return of the Jedi. Players will fight in the arena in locations inspired by the Stat Wars settings. We will be able to incarnate a bounty hunter and manage heroes of the Rebellion, as well as control former members of Palpatine’s hosts.

Lucasfilm Games works on various projects in collaboration with other studios. Star Wars: Knights of the Old Republic will return in remake form as a temporary PS5 and PC exclusive, while EA is developing a sequel to Star Wars Jedi: Fallen Order. Ubisoft, for its part, has commissioned Massive, the creators of The Division, an open world title that has not yet been shown. On the other hand, MachineGames (Bethesda) is the studio chosen to bring Indiana Jones back to video games.

The image of the second season of “White Lotus” shows the...