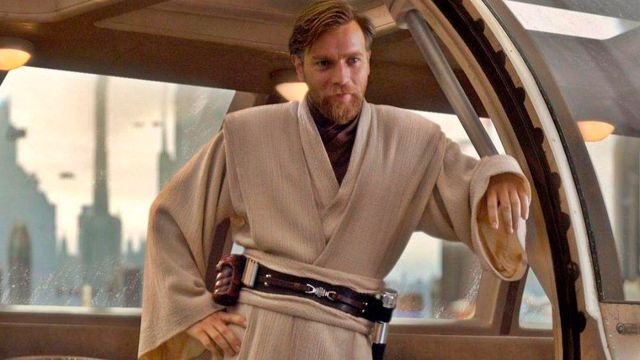 Star Wars: They photograph the famous actor in the middle of filming the new Star Wars series for Disney + wrapped in a black bathrobe that covers a large part of the suit.
New leaked photographs of the filming set of the Star Wars Obi-Wan Kenobi series arrive from the Los Angeles production where it is currently shooting indoors. And finally we can see its main actor, Ewan McGregor, characterized as the Jedi master Obi-Wan Kenobi, yes, without hardly being able to see details of his usual costume. And it is that as it usually happens between takes, the actors cover their clothes to avoid precisely this, that their look leaks before the premiere. Be that as it may, we can see some details such as pants or boots, in addition to the hairstyle that he will wear in the series, very similar to that seen in Episode III: Revenge of the Sith.

And it is that Obi-Wan Kenobi takes place between Episode III and Episode IV of Star Wars, closer to the first than the second, so it is natural that Obi-Wan looks very similar to the one seen in Revenge of the Sith. And despite the fact that in these new leaked photos he wears a mask, it is more than likely that he also sports a beard very similar to the one in Episode III; yes, recently the actor recognized that his Obi-Wan would have a slightly different appearance than we all know.

Along with Ewan McGregor, numerous supporting actors and actresses have also been photographed through typical Star Wars characters such as Imperial Commanders or the iconic Stormtroopers, again, all of them hidden under their respective black “camouflage” bathrobes. At the moment more details of the plot are unknown, although it has been confirmed that the story will take place ten years after the end of Revenge of the Sith, in which Obi-Wan promises that he will take care of little Luke while he lives with his uncles on Tatooine, leading to A New Hope.

The strongest form of the super-Slavic god of all time will...