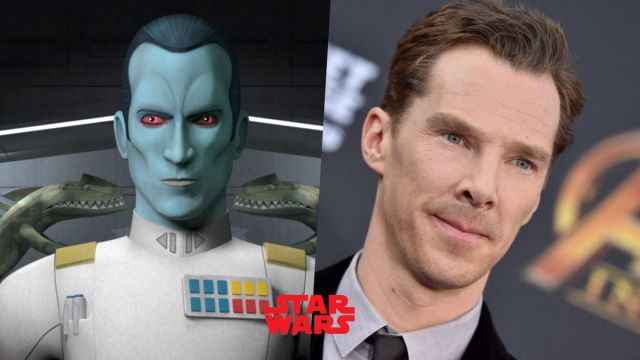 This expanded universe character, who was rescued in Star Wars: Rebels, is aiming to appear in live-action series.

Grand Admiral Thrawn may not be a familiar character to all those who only watched the movies, but he is a favorite villain for many Star Wars fans. Although he was born in the expanded universe, Lucasfilm has canonized him in Star Wars: Rebels, the animated series that succeeded The Clone Wars. In The Mandalorian, Ahsoka Tano gets to name him in one of the episodes, so his appearance in the flesh becomes more and more plausible. British actor Benedict Cumberbatch has been asked if he would like to embody this character, something that does not seem to make him too excited.

The interpreter is currently working on Doctor Strange in the Multiverse of Madness, but he has also played characters like the dragon Smaug in The Hobbit trilogy. Asked by Collinder, the actor has stated that he is not among his plans for his skin to acquire a bluish tone. For Thrawn’s race, the Chiss, are not only intelligent and masters of military strategy, but also completely blue.

The time is not right for Cumberbatch

“This is not for me right now,” Cumberbatch maintains firmly. “I am not going to turn blue. I already turned the air blue very recently. Actually no. My time with my kids is precious and I think sitting in the makeup chair and painting myself blue, with the amount of time that would take (and then taking it off at the end of the day) is not right for me at this point in my life.

Grand Admiral Thrawn is one of Emperor Palpatine’s most important officers along with Tarkin and Darth Vader. In the Star Wars: Rebels series he is portrayed by Lars Mikkelsen, so the return of him is rumored. If we analyze The Mandalorian, Ashoka’s original actress has been replaced by Rosario Dawnson, but Bo-Katan has the same actress who has played her all these years in the animated series, Katee Sackhoff.

New Among Us map release date has been announced