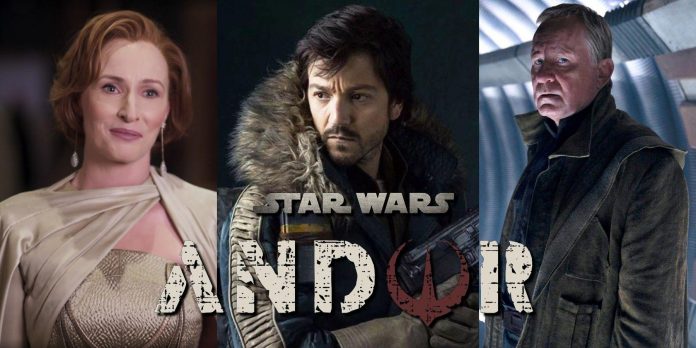 There are 3 new posters with several characters from the upcoming series “Star Wars: Andor”. With the premiere of the show on Disney Plus approaching, the level of excitement is steadily growing, and these gorgeous portraits will definitely help the cause.

After the Disney D23 Expo event (in addition to important moments such as Harrison Ford revealing his latest adventure as Indiana Jones), several content leaks were revealed. These leaks included a set of advertising posters with characters from Andor, but since they were not official, the quality left much to be desired. Now the “Star Wars” posters themselves have been released properly, and they’re pretty amazing.

Posters from Lucasfilm show the views of several characters. This naturally includes Diego Luna’s main character Cassian Andor, joined by Genevieve O’Reilly as Senator Mon Mothma and Stellan Skarsgard as newcomer Luten Rael. All three posters depict characters partially obscured by orange dust, behind which are several buildings and a set of flying X-Wing fighters, and each of them has the slogan “The Uprising begins.”

Andor will focus on the backstory of the titular character Luna, when he turned into a rebel freedom fighter, whom viewers recognized in the 2016 film Rogue One: Star Wars: Stories. But instead of being a war story like Rogue One, Andor has been described more like a spy thriller. However, war certainly still plays a big role, as Cassian’s struggle with the despotic Galactic Empire plays a central role in his arc. But even if it’s his story, he won’t be alone.

In addition to Mon Mothma and Luten Rael, Andor also starred Adria Archona as Bix Kalin, Kyle Soller as Imperial officer Cyril, Fiona Shaw as Maarva and Denise Gough as another officer Dedra Miro. According to Gough, her story will focus on gender politics in the Empire, offering a whole new perspective on the previously rather monolithic regime. In addition, Forest Whitaker will once again play the role of the rebel extremist So Guerrera from Rogue One.

The posters offer a fascinating look at what could be the all-encompassing style seen in Andor. It’s unclear how much of this will be translated and how much more is intended to evoke memories of the show than its appearance. But be that as it may, fans won’t have to wait long before the long-awaited Andor finally has its delayed premiere on Disney Plus. We hope that eventually this will be the fresh take on Star Wars that the franchise needs.

The premiere of the first three episodes of “Star Wars: Andor” will take place on September 21, 2022 on Disney Plus.