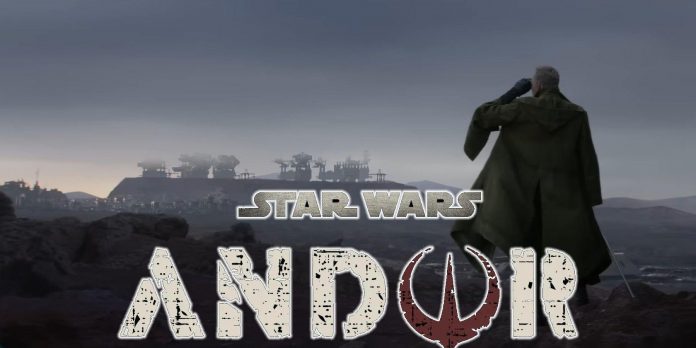 At the moment, one of the most interesting advantages of “Star Wars: Andor” is that the series will not use high-quality screen technology “StageCraft”, which was used in other “Star Wars” shows, instead more practical sets will be chosen. Well, it turns out that the upcoming show is getting pretty crazy with this concept, and viewers can expect to really feel it at the upcoming premiere.

Adria Archona, who plays mechanic Bix Kalin in Andor, recently told Collider about the series. The topic inevitably shifted to the creation of the “Star Wars” series, during which time she revealed the scale of what was actually built. “They built a whole city for us, like a whole city,” said Archona, referring to the planet Ferrix, which will play an important role in Andor. “I’m lost in this. I remember the first day I came to the set and I was already in costume, which was a coincidence. It just so happened that it was the day I was given a tour. I was at a costume fitting and I went there and I was amazed. It was a whole open-air city that exists. Ferrix exists. He’s not in the studio. These are not parts of the scenery that we shot in the studio. It is in many ways a city. keep talking for three to five city blocks. I could be wrong. And I can also be maybe lower, I’m not sure, I’m not good at distances.”

Next, Archon told in detail how much more authentic the sensations from the real location and huge scenery have become. “I had one scene where they were talking: “You need to run,” she continued. “And I’m like, “Where do you want to go?” And the director said, “Where do you want to go?” Because they could point the camera anywhere. I was going in one particular direction because Ferrix has a very specific geographical map. wherever you want. And it was really cool. I’m like, “Oh, so you can point the camera anywhere.”

The conversation also concerned the Archon’s character, Bix. She has some history with Diego Luna’s Cassian Andor, but it may not be immediately clear what that story is. “She likes to take risks,” explained Archona. “She’s brave and fearless, and she’s a junkyard manager. So she has a pretty stable life and she’s beautiful, she has everything under control, and then Cassian shows up, and then it always happens. Their dynamics are the same. which I love very much. So it was so much fun to dig in and play with it. They are childhood friends and you can feel that they have a history and their dynamics are complicated. You can almost say that their trust has been built and broken, built and broken for many, many years. However, she cares incredibly about him and protects him incredibly. Sometimes even to the detriment of yourself.”

Naturally, this is just a small part of what to expect when Andor finally premieres on Disney Plus. It is reported that the series is so far from the typical “Star Wars” formula about Jedi, lightsabers and much more that viewers can immerse themselves in it in a new way, without having to refresh anything (although revising “Rogue One” may be a good idea). So, of course, it will be interesting to see something, perhaps, completely original from this iconic franchise.

I hope that this will end with success. Since the series already knows how long it will be, there is a high probability that the narrative will be much more protracted. So eager fans and newcomers should buckle up for some funny spy thriller jokes.

The premiere of the first three episodes of “Star Wars: Andor” will take place on September 21, 2022 on Disney Plus.

Protected: Chan from TO1 will miss the stop of the KCON...