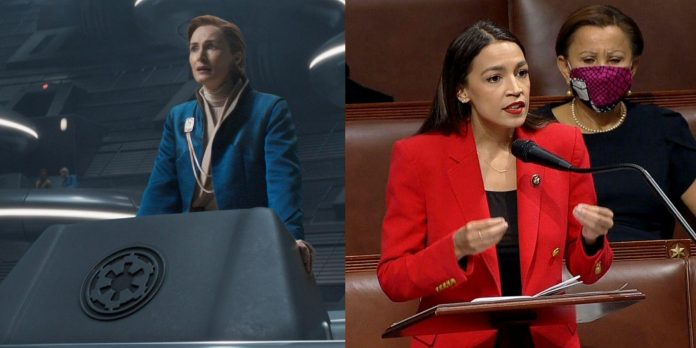 Whether it’s “Star Wars” or any other project, an actor or actress often draws inspiration from a real person when creating his interpretation of a character. In fact, it’s probably more standard than just creating something out of nothing or basing the game on the style of another actor.

Therefore, it is not surprising that Genevieve O’Reilly did the same maneuver when she entered the role of Senator Mon Mothma in Star Wars: Andor. With the kind permission of USA Today, O’Reilly detailed some of the inspirational figures she relied on when offering her own vision of the long-time “Star Wars” character. Among them are female politicians such as German Chancellor Angela Merkel, New Zealand Prime Minister Jacinda Adern and US Congresswoman and Animal Crossing fan Alexandria Ocasio-Cortez.

O’Reilly said she sees these women as “voices against the status quo, women who are willing to risk their voice in popular culture to stand up for what they believe in. And I think we see Mon doing it in Andor.” This seems to fit well with the supposed radical insurgent focus of the series, which some of the show’s participants say will reflect the real-world reaction to people like Donald Trump and his more fanatical followers. Andor is already ready to challenge the fan understanding of the “Star Wars” canon, and this, in all likelihood, will include a political aspect.

O’Reilly is also excited to explore new aspects of Mon Mothma’s character that haven’t been seen much since her first appearance in Return of the Jedi (played by Caroline Blakiston). “Before, when we saw her, she would pop up, and she was something like a column or a statue. She’s pretty noble in the Alliance,” O’Reilly said. “I like that they gave her time to embellish her a little, to meet the woman behind the cloak, if you want, to see what she has to struggle with, what she needs to strive for, what she has to risk, what her personal life may be. It’s something we’ve never seen before.”

No matter how burned out some people may be due to the fact that so many Star Wars projects have appeared these days, it’s hard to deny that the ubiquity of the franchise has given many chances to truly immerse themselves in elements that were almost not touched before. For example, many assumed that the main character of Diego Luna Cassian Andor and his family were separatists during the Clone Wars who opposed the Galactic Republic. If so, it will be very interesting to see how such a group will cope with the transition from a Republic to a repressive Galactic Empire.

Surely there will be many other exciting stories and interesting facts about the characters that will pop up during the two-season show of Andor, not to mention a lot of new creative music, different from the classic “Star Wars”. We hope that this will turn out to be something that fans will truly cherish for many years to come.

The premiere of the first three episodes of “Star Wars: Andor” will take place on September 21 on Disney Plus.

The Lord of the Rings: What Was The Hardest Scene To...