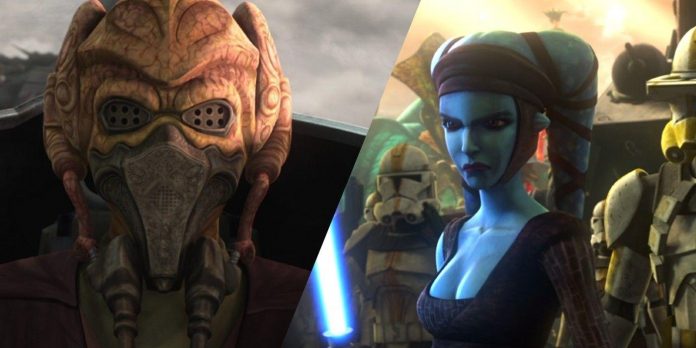 The Star Wars universe continues to grow with the upcoming release of Andor on August 31. Out of the hundreds of famous characters, few are as synonymous with the franchise as the Jedi even if they won’t be the focal point of the aforementioned series. The prequel trilogy especially introduced fans to dozens of new and exciting Jedi, from Mace Windu to Ki-Adi-Mundi.

Not every Jedi got their time in the spotlight though, and many were relegated to background characters despite some fascinating backstories. With the Obi-Wan Kenobi series hinting at even more Jedi having bigger parts to play, it is time to look back at those that deserved a little more screen time.

Jedi Master Plo Koon had one of the most unique and interesting character designs of any Jedi from the prequel trilogy. He was one of the highest ranking members of the Jedi Council throughout the trilogy, yet still only made a few brief appearances in the movies.

RELATED: Every Season Of The Clone Wars Ranked From Worst To Best, According To Ranker

Thankfully, the Clone Wars show expanded upon Plo Koon’s character immensely. He was shown to be a talented warrior, a wise and compassionate leader, and shared a special bond with Ashoka. Plo’s species can even survive briefly in space, which could have been awesome to see in an action sequence. Unfortunately, Master Plo was killed unceremoniously during Order 66, after only a few minutes of screen time.

The Mandalorian’s Grogu is not the first Star Wars character to share a species with Yoda. Since the species is known in-universe for being highly Force-sensitive, and so little has been revealed about them beyond this, any character of the species adds a new layer to the mythos.

Sadly though, Yaddle is only ever seen in The Phantom Menace, being a member of the Jedi Council when Anakin Skywalker is first brought to the Jedi Temple. While never addressed or given lines in the film, Yaddle’s character description in the Star Wars Character Encyclopedia labels her as very wise and patient. Thankfully, Yaddle was given more to do in extended universe books and is one of the more obscure playable characters in LEGO Star Wars: The Skywalker Saga.

Before he became the apprentice of Darth Sidious, Count Dooku was himself a Jedi and even trained Qui-Gon Jinn. Count Dooku was a primary antagonist in the Clone Wars series, but in the movies, he was never quite able to rise to the level of other villains like Darth Maul.

Count Dooku is fascinating as both a Jedi and Sith, and definitely deserved more of an arc than he was given in the movies. Not only was he played by Christopher Lee, who many feel deserves a movie himself, but Dooku was also a master duelist and brought a level of elegance and charisma to the Sith that was lacking from many of the other villains. Dooku’s rise and fall from Jedi to Sith was definitely worth exploring further than the movies did.

Yarael Poof, like Yaddle, only appeared in a single movie, also The Phantom Menace, and also never spoke or was spoken to. Despite this, his seat on the Jedi Council proves that he was an important figure in the Jedi Temple.

RELATED: 10 Smartest Characters In The Star Wars Franchise, According To Reddit

While little is said about him in the movies, the extended universe novels and Poof’s official background lore shows him to be a significant figure on the council, mostly due to his understanding that keeping the peace and preserving justice sometimes conflict. This perspective could have offered a new viewpoint for the Jedi in the films, or some tension. Also, Yarael supposedly enjoyed playing mind tricks on the other masters, which would have been fun to watch.

Poor Shaak Ti could not catch a break in the Star Wars saga. Over the course of movies, games, and TV shows, she has been killed off by a minimum of three different characters. First, she was killed by General Grievous in a deleted scene of Revenge of the Sith, then by Starkiller in The Force Unleashed, and finally by Anakin in another deleted scene.

Outside of her numerous deaths though, Shaak Ti was an intriguing character in her own right. Not only did she have an eye-catching unique design, The Clone Wars later expanded on her character, showing her to be a wise master who nearly unraveled the plot to destroy the Jedi and helped to train the Clone army. Unfortunately, Shaak Ti barely appeared in the films, and her canonical death remains offscreen.

Agen Kolar is often overshadowed by the other Zabrak Jedi, Eeth Koth, and even more often is mistaken for him. The two were originally intended to be the same character, but George Lucas instead wrote them as two independent and unique Jedi.

Agen Kolar was one of the Jedi that Mace Windu brought with him to arrest Chancellor Palpatine, and was killed almost instantly in the fight. The character encyclopedia states that Kolar was known for his powerful skill with a lightsaber. If this had been shown in the movies, it would have made his easy defeat at the hands of Palpatine impactful rather than pathetic and shown how powerful Palpatine truly was.

Coleman Trebor had a very brief appearance in Attack of the Clones, but his role was an important one. Trebor was the Jedi who attacked Count Dooku in the Geonosian Arena, and was killed by Jango Fett. This makes Coleman Trebor the first casualty of the Clone Wars.

Trebor is not only memorable for his death though, but also for the bravery that led to it. Coleman came very close to ending the Clone Wars before they even started. Before then, Trebor had taken over Yarael Poof’s place on the Jedi Council, and his place was later filled by Obi-Wan Kenobi. He may have only been on screen for a few seconds, but Coleman Trebor was essential to setting many later events in motion.

Jocasta Nu was the keeper of the legendary Jedi Archives and appeared in Attack of the Clones to help Obi-Wan find the planet Kamino. While her role in the movie was limited and not terribly significant, later media and extended universe novels made up for it.

RELATED: 10 Star Wars Characters Who Have Better Stories In Legends Than In Canon

In the Darth Vader comic series, Nu survives the Jedi Purge and attempts to fight against the Inquisitors to protect the data in the Archives. While she still meets her death at the hands of Darth Vader, she did so valiantly protecting a list of Force-sensitive children. At the least, Revenge of the Sith could have given Nu the defiant final stand she is given in the video game tie-in.

Another blink-and-you’ll-miss-it character in the films, Cin Drallig is only ever shown on screen in a hologram as he battles Anakin during the invasion of the Jedi Temple. In his very brief appearance, Drallig bravely dies fighting to protect his Jedi younglings.

Drallig’s character background, described by the Star Wars Visual Dictionary, says that he is one of the best lightsaber combatants in the entire Jedi Order. The phenomenal Revenge of the Sith tie-in game takes full advantage of this, as Drallig is fought in an extended and rather difficult boss fight. Drallig was the Jedi’s primary lightsaber instructor and leader of the Temple guard, but sadly only appeared in the movie posthumously.

Aayla Secura has become a fan favorite character in the years since her first appearance in Attack of the Clones. She is given little screen time in the prequels but is shown to be quite a powerful Jedi, leading forces in the battle of Geonosis before being given a particularly brutal death during Order 66.

While The Clone Wars finally gave Secura a little more time to shine, her legacy comes mostly from the immaculate 2005 game Star Wars Battlefront 2. Not only is she one of the strongest fighters in the game and the Jedi Order, but Battlefront’s story mode also shows the intense loyalty and respect that her clone comrades had for her, to the point where they were devastated that she had to die. Not only should Secura’s skills as a Jedi have made her a larger part of the film, but her bond with the clones could have made Order 66 even more devastating.

Disney+: Original Series To Be Released On Wednesdays