Home Entertainment Star Trek: Who will win, the Borg or the Dominion? 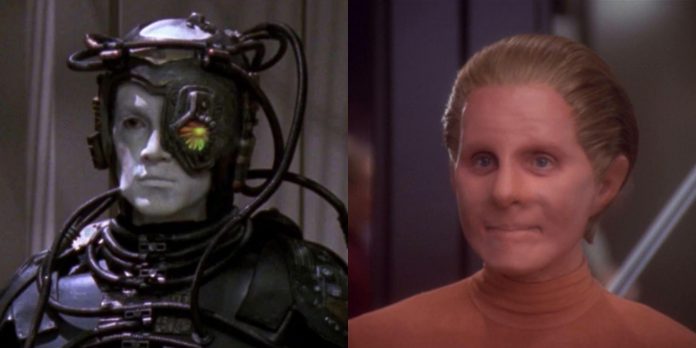 Star Trek has introduced a plethora of interesting and diverse alien races over the many years since Gene Roddenberry, first introduced audiences to the wild and wonderful universe in the late 1960s. While some of these races were shown fleetingly, and often shrouded in unsolvable mystery, there were a lot that played important repeating roles, such as the Vulcans and the Klingons, playing important parts as either friend or foe.

Some of the most memorable antagonists from the franchise were the Borg, and although they changed a lot over the years, they remained some of the most feared and dangerous adversaries the Federation had ever faced. That was until the Dominion showed up in the events of Deep Space 9, who almost wiped out Starfleet and much of the alpha quadrant. Despite their quadrant-shattering war stretching far and wide in Federation space, they were never shown to go up against the Borg. Of course, this raises the important question: who would win in a fight?

RELATED: Star Trek: The Unsung Heroes Of The Lower Decks

It may seem obvious on paper, the Borg having suffered a major defeat at the hands of the Federation, and the Dominion nearly wiping them out until the tables turned very late into the war. However, the truth is a bit more complicated. As powerful as the Dominion was, they had one major disadvantage against the Borg, specifically something unique to the Borg race (if it’s possible to call it that): assimilation.

The biggest strength of the Dominion, meanwhile, lies with its leaders, the Founders. They are a shapeshifting alien race of organic changelings, but interestingly, they are not naturally comfortable within a corporal form. They exist as a joint entity, a connected hive mind of sorts that looks suspiciously like a large lake of viscous jelly, only taking on physical ‘bodies’ and separating from the hive jelly on rare occasions.

Their existence as a massive shapeshifting entity gives them a huge advantage over other beings. They are able to adapt and challenge potential predators in various ways, and in connecting as a hive mind, they are able to learn huge amounts of shared knowledge and experiences to create a vast and almost unparalleled intelligence. This, combined with their natural strength and speed, gives them another advantage in combat, but they do have one huge weakness. They are not invincible, and can be affected with something so common as diseases, which prevent them from being able to shapeshift. They are also just as vulnerable as other organic races to energy weapons. While they are regarded by many who serve them as gods (something of a marker for evil in for Roddenberry), they are weak to many of the same things they are. The Founders are also far from godly when it comes to their ability to feel emotional shortcomings, such as stress, greed, anger, and melancholy.

All of these weaknesses can be targeted by their enemies, but it’s unlikely that they will ever find out about them. The Founders are so shouldered in myth and legacy, revered as Gods, that it would be very unlikely that anyone would talk openly about what can potentially hurt them. Even the Vorta, their right-hand species, who would perhaps know, would be very unlikely to divulge this weakness, being the strong-willed race they were.

This is where the Borg’s assimilation advantage comes in. All it would take is for one of the Vorta to be brought into the collective, and all the Founders secrets would be laid bare, highlighting exactly how to bring the Founders to their knees. With the knowledge possessed by the Vorta and Jem’Hadar absorbed by the Borg, the Founders would have been helpless, either assimilated or wiped out by the raw firepower the Borg posses. Whether the Founders can actually be assimilated it never addressed within canon. It is fairly likely that they cannot, due to their shape-shifting nature, and their natural state of being not being corporal. However, they could still be destroyed fairly easily due to another shortcoming the Founders have against the Borg: a single point of failure.

This is a term often used when looking at computer programs and algorithms, which is what makes it ironic to use it for the Founders rather than Borg. A single point of failure refers to a single point of a system that, if it fails, will bring down the entire program with it. For the Dominion, this single point of failure is the Founders, or more specifically the individual changelings they send out into the universe to collect information and amass experience to share with the hive jelly. Excluding DS9’s space policeman Odo, their function is to go out, collect data, and then return to the linked mind. By infecting just one changeling with any effective diseases, they could become a carrier, which would infect the rest of the collective then ultimately rejoining.

It’s important to note that, though the Borg at one point did not possess this same flaw, this was completely ruined by the introduction of the Borg Queen in the movies and the unpopular Voyager TV series. While defeating the Queen would hinder the Borg greatly, it would not cause their entire race to crumble. It has been confirmed that the Borg would still exist just without central guidance (until a new queen is chosen, perhaps). Furthermore, all of this military weakness does not even take into account that the Dominion would lack the same weaponry to even take on the Borg. Borg Technology is so advanced and eclectic, being the Frankenstein of hundreds of different races merged into one, that it took the Federation years of very specific study to scramble together primitive weapons that would work against them. The Dominion most likely lacks these weapons. Of course, all would change if the dominion somehow got their hands on the war criminal Captain Janeway, who proved to be a Borg-defeating queen on numerous occasions (though this is regarded to be down to poor writing rather than actual skill).