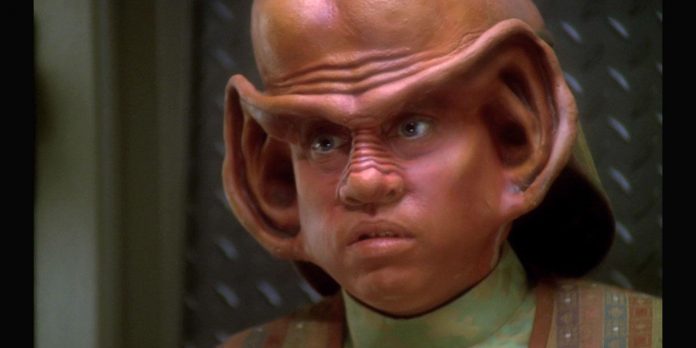 In the ever expanding universe of Star Trek, there has been a plethora of memorable characters. Some of these are the heroes of the story, stoic yet secretly softy folk like Captain Picard and Sisko. Others are well as lovable heartthrobs, such as the trill Symbiont Jadzia Dax and ex-Borg Seven of Nine. There are, of course, the memorable villains too, from omnipotent Q’s all the way to the love-hate relationships found within the Romulan empire. However, some of the best characters didn’t start out so great, the prime example being the Ferengi Nog from Deep Space 9.

The Ferengi have had a rough time throughout the Star Trek franchise, from their questionably antisemitic character designs to some of the worst portrayals of a supposedly advanced culture found within science fiction. Deep Space 9, however, changed all this. The money-centric, large-eared people went from an obnoxious, morally defunct annoyance to questionably some of the most well-loved characters in Star Trek history. Space station bar tender Quark was at the center of this change that the writers wanted to implement, transforming the Ferengi, much like they did with the Klingons, from nefarious aliens to lovable and enjoyable people. But Quark was not the only important Ferengi on the station. In fact, Nog arguably had a much better character arc than any other character within the franchise.

RELATED: Star Trek: Who Was Boothby The Gardener?

Nog was Quark’s nephew, and worked for a time in his bar. He was first introduced just after the Federation took over administration of the space station, and Nog was caught by security chief Odo helping a thief steal supplies. This was not a great start, and so far the character was successfully fulfilling each unfortunate Ferengi stereotype. However, he was let off the hook, used as a bartending chip for Captain Sisko to keep Quark on the station to boost morale. Nog then quickly found himself in the company of Jake, Sisko’s young son. As two of the few children on board, their friendship could be seen as somewhat inevitable, and soon the two became close. They were often seen causing mischief and playing various pranks, but they spend a lot of time sitting on the promenade, watching the vast array of people board and depart the station.

Nog at this point in the story is a strange mix of intriguing, lovable, and utterly obnoxious. This is potentially in part due to the writing and acting choices, making him unintentionally annoying, loud, and immature — potentially to give his character a much more satisfying character arc. The first example of this comes in fairly early on, in a vulnerable scene that lies hidden beneath multiple layers of annoying. It is shown in the episode “The Nagus” that morally ambiguous Sisko is uncomfortable with Nog and Jake’s friendship, believing the Ferengi to be a bad influence on him — which is actually fair, considering the amount of trouble the two get into together. This all fades away, however, upon learning that instead of plotting more pranks, Jake is actually teaching Nog to read. Thus, Sisko realizes that their relationship is highly constructive and deeper than he first thought. It is a blink-and-you’ll-miss-it moment that sows the seed of Nog not being the stereotypical annoying Ferengi he seems to be; rather, he is a complex character with a surprising amount of emotional depth.

As the story continues, the children grow up and mature, but Nog remains fairly the same immature prankster he was at the start. This is where the writers do something brilliant with his character: Nog asks Sisko if he can join Starfleet.

This comes as a curveball for multiple reasons. Nog has never been presented as Starfleet material, always breaking the rules and often being childish. More importantly, howerver, the Ferengi are not the type of people who would ever associate themselves with the Federation. Sisko (as well audiences) are shocked, unintentionally racially stereotyping Nog to the point where he thinks the teenager must be joking, or pulling an elaborate prank. He is so certain of this that he puts Nog through various trials under the guise of them being legitimate Starfleet training tests, hoping it will break his sprit and he will reveal what his true intentions are, but the young Ferengi never quits. He passes each test to the point where Sisko is the one to break, flat out asking him what the real reason was.

What follows is potentially one of the best written dialogues in Star Trek history. Nog casts off the tenets of his species, declaring that he wants to do something more worthwhile than chase profit in vain.

My father is a mechanical genius. He could’ve been Chief Engineer of a starship if he’d had the opportunity. But he went into business, like a good Ferengi. The only thing is, he’s not a good Ferengi, not when it comes to acquiring profit. So now all he has to live for is the slim chance that someday, somehow, he might be able to take over my uncle’s bar. Well, I’m not going to make the same mistake. I want to do something with my life. Something worthwhile.

This whole scene flips Nog’s character on its head, and hints to various different aspects that have been hinted at throughout the series. It is a slow burn getting to this point, episodes upon episodes of immature and annoying Ferengi action that all peel away in this moment. Nog grows up here, and it makes both audiences and Sisko reflect on their own Ferengi prejudices. Until now, Nog was a comic relief side character whose only purpose was to give Jake someone to interact with. Yet, he grew and changed as the show progressed, and became the first Ferengi to serve in Starfleet, much like how Worf was the first Klingon.

While this is by far the best example of Nog’s character development, his arc does not end here. He proved himself a vital Starfleet cadet, using his Ferengi hearing to the Federation’s advantage during the Dominion war. It was here, while performing heroic acts that helped the federation capture a vital communication array, that he lost his leg in a battle with Jem’Hadar soldiers.

It took a while for him to recover. Replacing his lost leg with a fully functioning biosynthetic one was a fairly straightforward procedure, but his emotional state took a hit. He used a cane, and was in constant pain, but this was relieved later to be a side effect of his emotional state being in turmoil. After the war finished, and he was fully healed, he was rightfully promoted to lieutenant junior grade, rounding off a truly wonderful and stratifying story arc that somehow managed to symbolize everything that Star Trek was trying to teach: never judge a book by its cover.