Home Entertainment Star Trek: The Strange Story of the Franchise 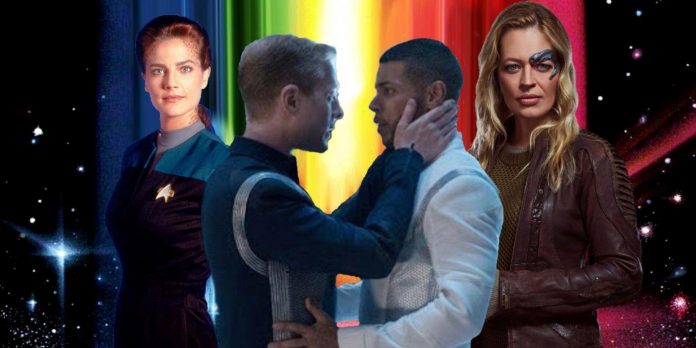 The Star Trek franchise is known to push the boundaries of what is acceptable for mainstream television, and one way to do that is to explore LGBTQ+ topics. “Star Trek: The Original Series” started in 1966, in a decade when many social norms were changing. Themes of race, gender, and sexuality were pushed to the forefront of public consciousness, and TOS began a tradition of using episodes to reflect the social and political issues of the day. Following in the footsteps of TOS, every Star Trek captain and crew has since continued the trend of addressing current real-world topics.

It’s worth noting that while TOS has been a trendsetter in its storylines about race and gender politics, the series has never explicitly introduced queer characters, as in Star Trek: The Next Generation. At the time of its airing, there were a significant number of established rules regarding what was considered acceptable and what was not considered acceptable to be shown on network television. TOS got away with a lot of things that the network may not have wanted to show, like the subsequent franchise shows, but it’s only in the last four to five years that any explicitly LGBTQ+ characters have become part of an increasingly diverse “Star Trek.” franchise.

It may seem that this fact refutes the idea that “Star Trek” has some kind of queer history. However, while explicit representation is very important, the Star Trek universe has historically not needed to be openly gay in order to still be tied to the LGBTQ+ community. Whether through LGBTQ+ actors, research into sociological and political topics, or by attracting the interest of queer fans who have felt a connection with certain characters, “Stark Track” has a thread of queerness that can be traced in most of its shows and films.

As mentioned earlier, there were no LGBTQ+ main characters in TOS, but George Takei, who played helmsman Hikaru Sulu, became gay in 2005, years after the show ended. Since then, Takei has been a prominent and active member of the LGBTQ+ community and an advocate for LGBTQ+ rights, thanks to which he is known even to a younger generation of science fiction fans. Sulu was one of the main characters of TOS, and the fact that he now knows that he was portrayed by a gay man who always championed queer issues makes both Sulu and Takei very important figures in the queer history of Star Trek.

In addition, TOS saw the creation of a fan community that attracted two characters due to what they perceived as the strange subtext of the characters, namely Captain James T. Kirk and his first mate Spock. The fandom that arose around Kirk and Spock is credited with the origin of the term “slash”. Slash is when fans create fan works, such as texts or drawings depicting two male or two female characters from a certain material in a same—sex relationship. The slash of the name comes from the backslash, which is often added between the names of two characters to designate them as a couple (for example, “Kirk / Spock”). Despite the fact that Kirk and Spock were never a couple in the series, fans portrayed Kirk and Spock as one in a number of fan magazines that were mailed out in the 1970s, which predated the current fan communities on the Internet. Regardless of whether the queer subtext between Kirk and Spock was intentional or not, these two characters are inextricably linked to the LGBTQ+ community for people who know the history of their fandom.

Star Trek: The Next Generation

As in TOS, in Star Trek: The Next Generation, which ran from 1987 to 1994, had no main characters explicitly belonging to LGBTQ+. However, one episode of the series stands out as a convincing allegory of queer problems. The 17th episode of the 7th season, titled “Rogue”, tells the story of the crew of the Enterprise, who encountered a group of aliens named J’nai from a planet where the binary gender does not exist. All J’nai identify themselves as gender-neutral, and anyone who harbors the feeling that he is a man or a woman is considered deviant and sick by society. During the episode, Commander Riker works very closely with a J’nai named Soren, who shows him that she feels like a woman. True to Riker’s romantic skills, they get close and begin a romantic relationship, but when they are discovered, Soren immediately appears before a hearing to decide her fate, where she passionately pleads with herself and others like her to be treated better. The J’nai Society. “It’s not unnatural.” She tells her people. “I’m not sick because I feel that way. I don’t need any help. I don’t need to be treated.”

Netflix’s Marvel Series Will Soon Disappear From The Platform: Heading To...