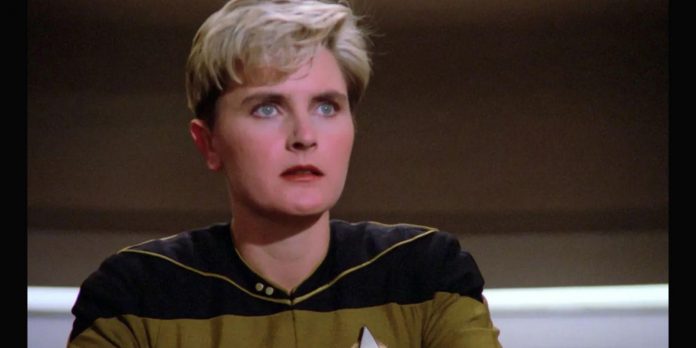 Since “Star Trek” appeared on the small screen, there have been many interesting and diverse characters originating from the universe. Some of them have gone down in history, from the mysteriously serious Picard to the cult personality of Kirk William Shatner. And each of them was surrounded by an equally well-thought-out list of minor characters.

Some, however, have gone down in history for completely the wrong reasons. Some characters, such as Neelix and Wesley, annoyed most of the fans. Worse, however, are those who had the potential to become great, but they were unceremoniously swept under the carpet and forgotten. Of these cases, none is as notable as the head of the “Next Generation” security service, Lieutenant Tasha Yar, and her senseless demise.

Lieutenant Yar was played by Denise Crosby, and he first appeared in the first season of the TV series “The Next Generation”. She lasted 22 episodes in the key role of the head of the security service, until she met her untimely demise from the plump hands of the tar monster. The episode, titled “The Skin of Evil,” was groundbreaking in many ways. The series’ decision to kill off one of its main characters after so many years could be a refreshing look at the semi-immortal cast of main characters who were pioneers of the TV show up to this point. The problem, however, was how they did it. Yar’s death was a cruel and senseless death that came out of nowhere and eventually became like an outburst.

The reasons for this mostly lie, unfortunately, outside the “Star Trek” universe and in the uncomfortable sphere of behind-the-scenes politics. Crosby was discouraged and disappointed by her character in the series. She felt like she was being sold for a false promise that she would play a cool female security guard with a fascinating story, but when it came to filming, everything was different. Yar had a rough sketch of the backstory, he grew up in a lawless and abandoned Earth colony called Turkana IV, but other than that there was nothing concrete or convincing. What’s even worse is that instead of playing a powerful woman in a genre so often dominated by men, she was more an object of desire. Tasha Yar served as a candy for the audience, combining with a deliberately low neckline and a senseless uniform worn by Dianne Troy to give the bridge a sex appeal.

This happened not only because she had a rather limited role in the series, but also because of two other notable episodes before “Skin of Evil” in which she played a big role. These include the terribly aged “Code of Honor” and “Naked Now.” In these two episodes, Yar was the object of lust. In the first, she is captured by an authoritarian alien ruler, so she can fight for the right to be his wife against his first wife. In the latter, where she seduces and sleeps with Commander Data under the influence of an alien virus. Both episodes were vivid examples of how, instead of demonstrating strength, Crosby played a role created solely for female attractiveness.

All these reasons made Crosby fall out of love with the series very quickly, and although this was most likely due to problems in the first season of the show, she was unable to continue in the same spirit and decided to apply for termination. her contract. Gene Roddenberry agreed with this, but seemed to do it reluctantly and thus formulated a senseless and disappointing death, similar to a discarded character in a red shirt.

Fortunately, TNG’s business has improved. After Roddenberry distanced himself from the show due to health problems and after the complete shock of the writers, Yar received a well-deserved send-off. She appeared again in the season 3 episode “Yesterday’s Enterprise”. During this episode, the time gap changes the main timeline, resulting in the Federation still at war with the mighty Klingons, and Yar, who never died. After hearing about how her alternate timeline died, she summed up the whole situation perfectly:

“I died a senseless death in a different timeline. I didn’t like the sound of it […] I was always aware of the risks associated with Starfleet uniforms. If I’m going to die in one of them, I’d like my death to mean something.”

Yar’s alternate timeline continued and eventually sacrificed herself to bring the timeline back to normal. She died so that, finally, after all these years, the heroine received a well-deserved death. Crosby will return later, in a rather confusing and unfinished plot centered around Yar’s half-Romulan daughter, the commander of Sela, but this last act of defiance and bravery in the face of great danger was the end of Yar’s story. This corrected the mistakes caused to her character in the first season.