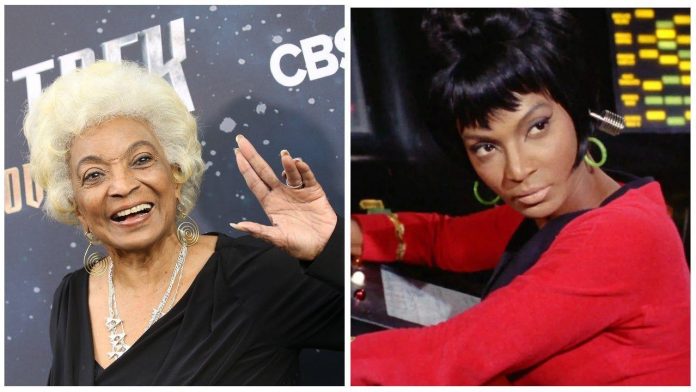 Nichelle Nichols is best known in pop culture as Lieutenant Uhura from the Star Trek (now known as Star Trek: The Original Series or TOS). Her legacy, however, expands so much further. From her importance to the Civil Rights movement to her extensive work recruiting women for NASA, Nichelle Nichols’ life expanded not just to the fictional stars, but to the real ones.

A series born in the turmoil of the 1960s, Star Trek presented a utopian vision for a future where humanity has shed its war-like nature, its greed and acquisitiveness, and perhaps most importantly for a show coming from America, its deep-seated racism. It was a bold new idea in the TV landscape. Everyone was aware of Star Trek, and the impact it had on science fiction, storytelling in general, and the world at large really can’t be overstated. Nichelle Nichols was a key part of that impact, and despite her recent passing, will be remembered for generations to come.

Grace Dell Nichols was born December 28th, 1932, the third of six children in the Chicago suburb of Robbins, Illinois. Her father, Samuel, was a factory worker who had been elected mayor and magistrate of the suburb in 1929, and her mother Lishia was a homemaker. As she grew up, the girl was already as bold as the five-year journey she’d become famous for embarking on: dissatisfied with her given name, she asked for a new one. Her parents offered her Nichelle, from “Nike” (victorious) and “elle” (maiden). The irony is that, in the fourth Star Trek episode, “The Naked Time,” an ill Mr. Sulu, on a shirtless rampage, calls her a maiden, and she denies the claim in a bit of cheeky wordplay on the dual meanings of the term (him meaning “female” and her, “virgin”).

Growing up, Nichols followed the careers of people like Mahalia Jackson, Lena Horne, and Eartha Kitt, who all, as Nichols once said in an interview in the New York Post, “all looked like me.” This led to her touring with the Lionel Hampton and Duke Ellington bands as a singer. (She’d only get to show off this talent a few times on Star Trek, most notably the episodes “Charlie X,” “The Conscience of the King,” and “The Changeling.”) Ultimately, Nichols pursued a career on the stage, starring in Chicago plays with her eyes on the prize: making it in New York.

“I was raised and grew up in musical theater. Broadway was the highest level for me, and that’s where I was going to reign queen.”

Though she had never thought of a long term television career, she eventually took the role of fourth in command on the bridge of the Starship Enterprise, a decision that the producers felt unsure about during the tumult of the burgeoning Civil Rights movement. The character, Lieutenant Nyota Uhura, was the communications specialist on the bridge of the USS Enterprise. She was often seen holding a hand to the earpiece she wore, putting whoever was attacking the Enterprise on screen, so that Captain Kirk could have a showdown with the enemy of the week. It was with William Shatner, who played Kirk, that she’d share what would the first interracial kiss seen on television.

Nichols, for her part, saw the role as a season-long stepping stone in her aspirations to ascend to Broadway. However, the Civil Rights movement entered the picture in the form of a great man and leader of the movement, Martin Luther King, Jr. Per Nichols, she met King at a fund-raiser where he told her he was her greatest fan, and that it was both wonderful and inspiring to see her on TV every week. She informed him of her intent to leave the series behind, and he stopped her. “You can’t do that,” he said, and according to her memory, went on to explain why:

“You have the first non-stereotypical, nonmenial role on television. You have created strength and beauty and intelligence. For the first time, the world sees us as we should be seen. It’s what we’re marching for. You’re a role model and whether you like it or not, you belong to history now.”

This was echoed in a Tweet sent from MLK’s daughter, Bernice King, upon learning of Nichols’ passing. Inspired by King’s words, Nichols would stay and see the series through, and join the films afterwards.

Throughout her career, Nichols produced plays, starred in soap operas and other sci-fi shows like Heroes (and played herself humorously on Futurama), and even put out a couple of albums. However, it’s her work with her company, Women in Motion, that got contracted to NASA, which stands out after she left the Enterprise behind. The program was a massive success, recruiting Sally Ride (the first female astronaut); Guion Bluford, an Air force colonel and first African American astronaut; as well as Dr. Judith Resnik and Dr. Ronald McNair (both of whom would unfortunately pass away during the space shuttle Challenger disaster). NASA themselves credit Nichols with inspiring a whole generation of women and people of color joining the organization and entering STEM-related fields.

Nichelle Nichols herself helped send off the first Enterprise space shuttle, alongside much of the crew of the original Star Trek series, and saw the Viking 1 land on Mars as a special guest of the Jet Propulsion Laboratory, both in 1976. During the 1980s, she worked on the board of governors of the National Space Institute where she advocated for space exploration. In 2012, she toured the space shuttle simulator and in 2015 finally went lighter than gravity as she got to fly for eight hours in the Stratospheric Observatory for Infrared Astronomy (SOFIA, for short) while it inspected the atmospheres of Mars and Saturn.

On July 30, 2022, Nichols passed away at the age of 89, leaving a long legacy of advocacy and subtle craft behind. Having once acted amongst the stars of a soundstage, she has now entered into the cosmos itself — but her legacy remains strong here on Earth.

JYPn Finally Introduces Lily As The Next Member