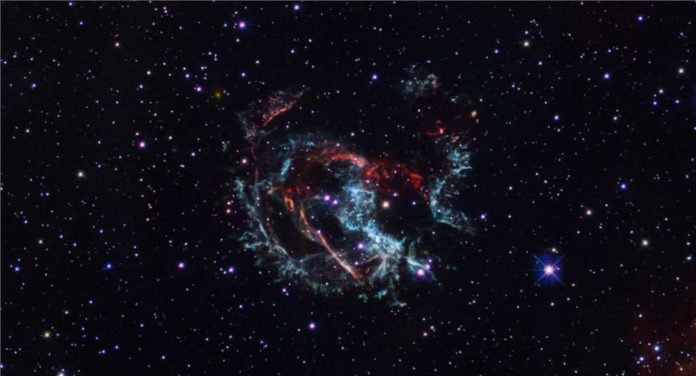 When a massive star reaches the end of its life, it explodes with an enormous flow of energy called a supernova. As the shock wave from the explosion spreads into space, it creates a residue that can last for thousands of years. This type of relic was imaged by the Hubble Space Telescope, and researchers traced its origin to the supernova that occurred 1,7000 years ago.

To calculate the age of 1E 0102.2-7219, Hubble researchers compared images taken 10 years apart. By comparing the two, they could see that ejecta (knot) clusters spread out over time.

By running this speed backwards, the time at which the supernova should occur can be calculated. This result is different from previous attempts to precisely determine the age of the residue using data from different cameras. In addition, the new result using data from the camera provides a more accurate value.

Danny Milisavljevic, leader of the research team from Purdue University on the research, said, “A previous study compared images over the years with two different cameras on Hubble, Wide Field Planet Camera 2 and Advanced Camera (ACS). However, our study makes the comparison much more robust by comparing the data received with the same camera, ACS; It was much easier to track knots using the same instrument. “The fact that we can make such a clear comparison between the images taken 10 years apart is a proof of Hubble’s longevity.”

When the supernova occurred, it launched the star’s crushed heart (a neutron star) into space. Researchers estimate that the neutron star moves more than 2 million miles per hour.

“This is pretty fast and at the extreme of how fast we think a neutron star can move,” said team leader John Banovetz on the subject. said.

Researchers have identified an object that could be the neutron star in question, but they’re not sure if this is the object they’re looking for yet.

“New research questions whether the object is actually the surviving neutron star of the supernova explosion. It is a small cluster of supernova ejecta that is potentially only enlightened and supports it, ”explains Banowetz.