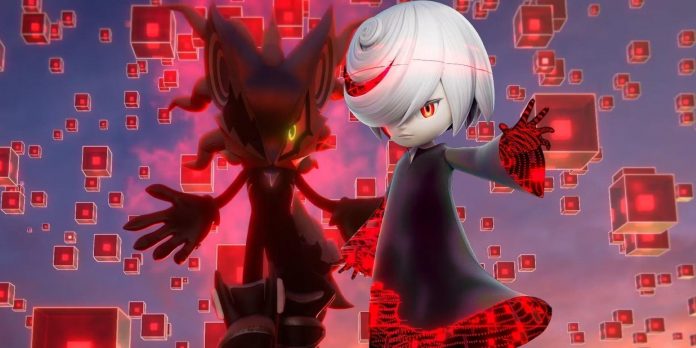 As anticipation for the official launch of Sonic Frontiers grows, Sonic’s latest opponent, the Sage, has finally been revealed thanks to a story trailer shown at Gamescom this year. While other details have been confirmed, such as the November 8th release date or the game’s setting, Sonic Frontiers has focused on showcasing the confrontation between Sonic, Sage and what fans believe to be her powers, accompanied by cryptic lines about the destruction of the world and Sonic’s intervention. But fans were quick to point out the similarities between Sage and Infinite, one of Sonic’s last antagonists, first seen in Sonic Forces.

While it remains to be seen whether Sage and Infinite share the goals of world domination or destruction, it cannot be denied that they at least have striking similarities. Due to their red aesthetic and sinister ability to hover over Sonic, fans are concerned that these two characters may be too similar. Especially considering the mixed reaction to Infinite when it debuted in Sonic Forces, Sonic Frontiers is under pressure to learn from Infinite and improve Sage’s characteristics, motivation and her overall storyline.

Details about Infinite can be found not only in Sonic Forces: Episode Shadow, but also in the digital comic Sonic Forces. In the comics, especially in the latest issue titled Sonic Forces: Rise of Infinite, both Infinite’s motives and motivation for an alliance with Eggman are revealed. Upon contact with the Illusory Ruby that Eggman owns, Infinite is shown a vision of his secret desire: a destroyed world. In the light of this vision, Infinite admits that he is bored with the world, and joins Eggman to gain more power and strength.

Playing as Shadow in Episode Shadow, Infinite’s “origin” is revealed in a cut scene retelling his first encounter with Shadow. This encounter was supposedly the catalyst that led to Infinite becoming the character that players see in Sonic Forces, as Shadow crushingly defeats Infinite, leaving him distraught with his own weakness. With Eggman’s help, the Infinite was merged with the Ghost Ruby, which gave him the opportunity to manipulate virtual realities in the real world, as well as become faster, stronger and more durable.

Infinite’s supposed omnipotence would have been fine for a Sonic game, as he would have joined the growing list of other extremely powerful Sonic villains, but players and critics found Infinite too one-dimensional. For example, it was shown that Infinite has a sadistic and power-hungry personality before the battle with Shadow, which gives the impression that Infinite always wanted to be omnipotent. Sonic Forces never explains why, so with a weak premise of a revenge story and relying on the image of an omnipotent villain who is destined to lose, the Infinite character eventually turns into an ordinary villain who is bad “just because”.

Due to her recent disclosure, everything Sonic fans know about Sage is limited. However, it is currently known that she is somehow connected to the Starfall Islands, where the action of Sonic Frontiers takes place, and seems to be at odds with Sonic when he tries to save his friends. While she appears hostile and controls the enemy robots fighting Sonic, Sage seems to want Sonic to leave or voluntarily surrender. She’s already in stark contrast to the likes of Infinite, but until players find out her true motives, they can’t be sure what kind of antagonist she’ll be.

Although their “powers” may look the same, the similarity of the Sage and the Infinite may just be a coincidence. For example, the reusable red color can be combined with the blue color of Sonic, while the digital aesthetics of Sage can deviate from the Phantom Rubies. Moreover, the lines from the trailer that talk about the danger to the world may sound like something Infinite can say, but since the dialogue coming from Sage seems to imply a hidden, more benevolent motive that is not immediately obvious to the player.

So Sonic Team seems to be already on the right track with Sage, teasing a possible storyline of a villain doing bad things for a good reason. Compared to Infinite, who was a villain just because he could be, Sonic Frontiers will need to double Sage’s character and knowledge, even if she turns out to be completely evil. After all, sympathetic villains from video games can make a story more realistic and engaging than the bad guys the players are fighting, simply because the game told them to do it.

Sonic Frontiers is scheduled for release on November 8, 2022 for PC, PS4, PS5, Switch, Xbox One and Xbox Series X/S.