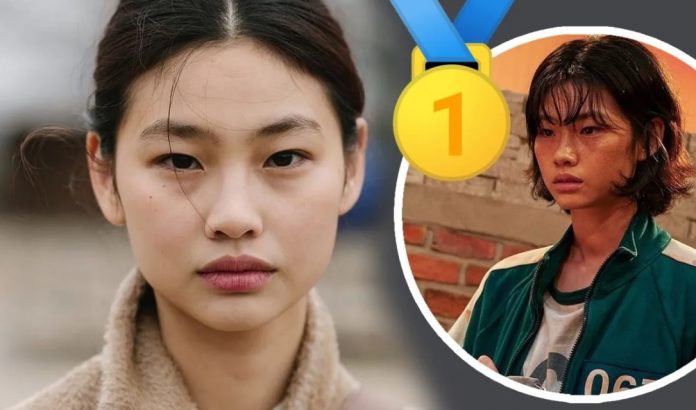 Hoyeon Jung, actress and model who was part of The Squid Game has not stopped gaining fame around the world. Her modeling career was already quite successful, but after acting in Squid Game Hoyeon captured the eyes of international audiences who are now following in her footsteps and new projects.

Only a month has passed since the premiere of the original Netflix K-Drama , but from the first weekend it was already highlighted by all the attention it began to receive until it became an Internet phenomenon. The entire cast of The Squid Game has seen an increase in the recognition they get from the public, but one of the most prominent cases is without a doubt that of Hoyeon .

Her Instagram account used to be around 750,000 followers, but as Squid Game reached more and more people, the girl’s list of followers also increased considerably, adding one million after another.

Jung Ho Yeon recently became the most followed Korean actress in this social network, surpassing big stars like Song Hye Kyo and even Lee Sung Kyung , but the shows of support for the girl continue and that is demonstrated in all the attention you are getting in the app.

Recently, her account under the user @hoooooyeony surpassed 20 million followers on Instagram, reaffirming her position as the K-Dramas actress with the most followers and giving great joy to her fans who have seen her travel different areas when it comes to being in front of cameras.

WHO IS HOYEON IN SQUID GAME?

Hoyeon was in charge of playing Sae Byeok in The Squid Game, the actress wore the number 067 on her uniform as a player and it was about a defector from North Korea who was trying to help her brother, but also to lead her parents to South Korea.

The actress is also good friends with BLACKPINK’s Jennie , so the idol showed her support during the series preparations, and their friendship also became a focus of attention.