Home Entertainment Squid Game: all the reasons to succumb to this mysterious series which... 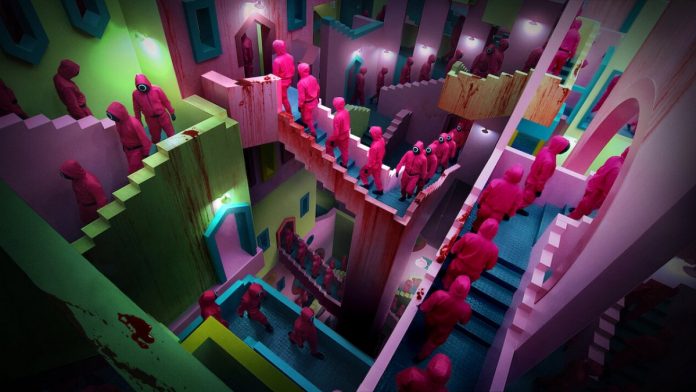 Coming straight from South Korea, Squid Game is the new series topped the playlists of many Netflix subscribers. In the top of several countries, we tell you more about this creation phenomenon which creates the surprise.

It is probable that the name Squid Game did not mean anything to you yet at the beginning of this month of September 2021. However, made available on September 17, the series is now on everyone’s lips, or rather all screens, and is place in the top of the most viewed series on Netflix in several countries since its release. In recent years, the platform has become a master in the art of popularizing Asian productions and especially of mobilizing fans. The Netflix catalog is proof of this: from My Holo Love to Nevertheless, the number of Korean “dramas”, a true social phenomenon in East Asia, is exploding to finally be made accessible to a very demanding Western audience. Squid Game is part of a trend that is also very clear on the platform, thrillers and bloody survival adventures: the year 2020 was marked by the success of Alice in Borderland – renewed for a season 2 -, a Japanese series taken from ‘a famous manga that follows three friends trying to survive in a parallel and deserted Tokyo (or almost), or Sweet Home, a South Korean horror series centered on the inhabitants of a building in Seoul trying to survive a invasion of monsters. Not without recalling the Battle Royale film, Squid Game, whose creator gave elements about a season 2, will appeal to fans of survival.

What is the Squid Game series about on Netflix?

Hopscotch, marbles, role-playing games or perched cat … These are games that you must have known as a child, in the playground. Koreans, at school or on playgrounds, also have their own version. And it is on one of these games, called “the octopus game”, that Squid Game innocently starts. Mixture between hopscotch and hawk, we discover in the series the rules of this famous game of the octopus during a game with friends after school. But the nostalgia bubble is short-lived. Quickly, Squid Game follows the day of Seong Gi-hun, played by Lee Jung-jae, forty-something beside the plate, divorced, who returned to live with his mother. And for good reason, addicted to games, Gi-hun is broke and completely over-indebted, with bankers and loan sharks at his heels. So, when he meets a mysterious man who offers him to make easy money just by playing games and leaves him his business card, Gi-hun does not hesitate for long to call to register. He is then kidnapped and wakes up in a room with over 400 other players. What do they have in common? They are all over-indebted, have lost everything and, for some, are ready to inflict the irreparable. Mysterious men in red will then offer them to play games, known in their childhood, to win huge sums. The downside that participants will discover too late is that the losers will all be eliminated. In the literal sense of the word. The struggle for gain and survival is then engaged.

Why you will succumb to the Squid Game phenomenon on Netflix

It’s hard to watch Squid Game without thinking of Battle Royale or even The Hunger Games. With the difference that Squid Game, and this is the strength and interest of the series, is completely anchored in the present and offers us characters and trajectories inspired by a sad reality for a part of the Korean population. . Gi-hun is certainly the most common example in South Korea. That of a working-class man who, after quitting his job, never succeeded in reintegrating himself and sank deeper every day into his addiction to racing games, relying on his mother, who still working in the market despite having largely passed 70 years. But the series offers a real panorama of the course of life.

Sang-woo (Park Hae-soo) first, from the same neighborhood as Gi-hun, had managed to finish his studies and become an important businessman. But bad investments made him lose everything and left him almost on the verge of suicide. Gi-hun will also meet Abdul Ali (Anupam Tripathi), a Pakistani immigrant exploited for his employer, which leaves him and his family with no money for food. Or Il-nam (Yeong-su oh), an old man suffering from a tumor that he cannot cure for lack of means, and Sae-byeok (Jung Ho-yeon), a North Korean defector, struggling with unscrupulous smugglers as she desperately tries to get her family across the border.

Squid Game is already a hit on social networks

There are many reasons that make the Squid Game a success with Internet users. First, all the elements of mystery that make fans wonder: who are the organizers of these games?

Terrifier 2 Has Fans Who Are Sick in Cinemas, Producer Issues...

Elden Ring: A Player Steals A Legendary Weapon During A Competitive...