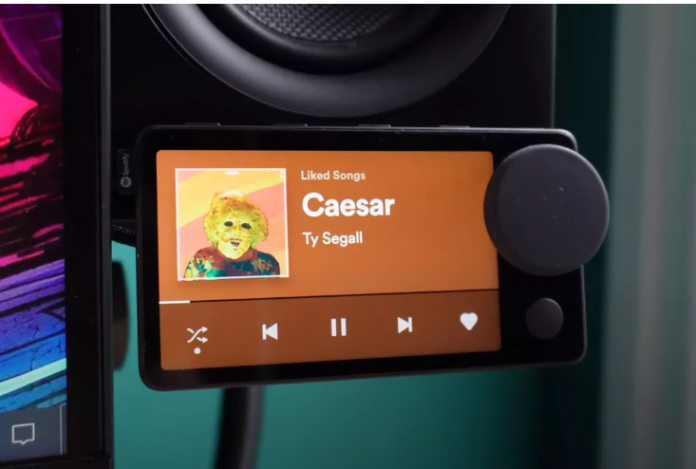 In short: The Spotify Car Thing accessory didn’t revolutionize listening to music while commuting, as it was supposed to, prompting the streaming audio giant to quietly stop releasing the device in the summer. In hindsight, maybe Spotify was just mis-selling it?

The YouTube channel Work From Home has repurposed the Car Thing as a desktop music controller, and I have to say that it looks like home in this environment. With it, you can skip tracks and adjust the volume using tactile buttons and controls. There’s also a touchscreen for those who like to swipe their finger across the screen, and a built-in microphone for voice commands if you’re feeling a little lazy.

The ambient light sensor helps the display match the brightness of the environment. It will add bright colors to your table, which will undoubtedly appeal to those who love album covers. Only one USB cable is required to power the Car Thing. Where to install it depends on you, but above the keyboard or to the side of the monitor, both options seem like great options.

For some, Car Thing will evoke memories of listening to music on standalone devices such as the iPod or Microsoft Zune. Personally, it reminds me of the Logitech Z-5500 speaker system, or perhaps the fancy NewQ Gold equalizer for the 5.25-inch disk bay.

As you can see from the video, there are some disadvantages that you should be aware of in advance. Since this is official Spotify hardware, it only works with the Spotify streaming service. Apple Music, Napster, Tidal and similar services are incompatible, and local tracks are not played using Winamp, etc.

Although Car Thing can play music from Spotify on your computer, it must have a permanent connection to your smartphone via Bluetooth. This probably isn’t a problem for most, but it’s something to be aware of.

Car Play costs only $29.99, as Spotify hopes to remove excess inventory. It’s a steal at that price, and since there are no more units in development, you can go ahead and buy one if it’s of interest.

Live life: how to get all the endings

PSN has ‘Easter Promotion’ with up to 75% discount