Home Entertainment Spotify Wrapped 2021: What Was The Most Listened To Around The World?

One of the most anticipated times for music and streaming lovers has arrived. As soon as the first minutes of this December 1 began, the last month of the year, the platform enabled its Spotify Wrapped 2021 , a count of the most listened to by users throughout these 12 months and, as expected, to globally, within the statistics, include the reggaeton of Bad Bunny and the K-Pop of BTS .

In these seasons, it is normal for social networks to be flooded with stories or publications that presume the captures of personal counts from Spotify Wrapped 2021 but surely you wonder, in addition to those my friends listen to, what music was the most consumed all over the world?

If you’ve been keeping an eye on the year’s music trends and popularity counts, you might not be surprised by what we’ll find in the global stats. The shocking thing is that, as in previous years, a Latin artist has managed to once again lead the top 5 of the most reproduced internationally and other genres have climbed within the list.

Spotify Wrapped 2021: What was the most listened to around the world?

According to the report of the Spotify Wrapped 2021 : What The World Streamed Most, the singer who managed to accumulate more you hear during this period was, again, Bad Bunny , for the second consecutive year. Puerto Rican got the amount of 9.1 million streeams in its catalog, despite not having released any album.

“San Benito” is followed by Taylor Swift, who released 2 LPs this year: her re-recorded versions of ‘Flawless’ and ‘Red’. Later, in third place, are the greatest exponents of K-Pop on the planet: BTS , who broke records with “Butter” and the rest of their catalog.

Finally the ‘Most Streaming Globaly Artists’ is closed by Drake and his ‘Certified Lover Boy’, in fourth position and Justin Bieber, who presented ‘Justice’, in number five. 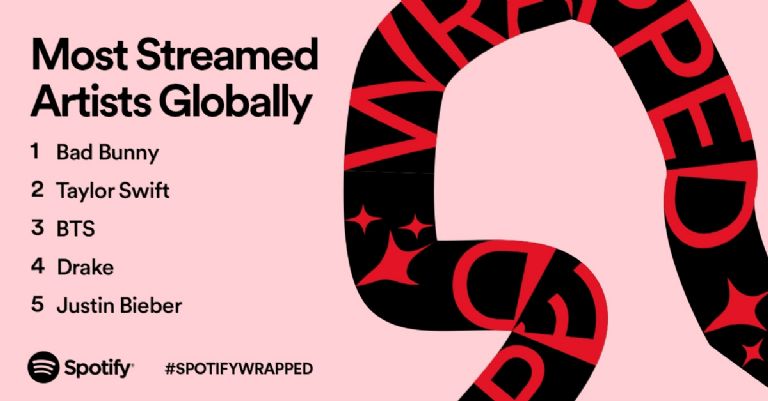 Regarding the songs, in this section of Spotify Wrapped 2021 we do not find Bad Bunny or BTS , nor any of the other stars most played worldwide. Instead, the favorite was “Drivers License” by Olivia Rodrigo, who also managed to place “Good 4 U” in fourth place.

‘MONTERO (Call Me By Your Name) “Lil Nas X was the second most played song, followed by” STAY “Justin Bieber and The Kid Laroi. Finally,” Levitating “Dua Lipa and DaBaby finish this chart.

The most streamed albums on Spotify Wrapped 2021 were ‘Sour’ by Olivia Rodrigo, ‘Future Nostalgia’ by Dua Lipa, ‘Justice’ by Justin Bieber, ‘=’ by Ed Sheeran and ‘Planet Her’ by Doja Cat, one in each. Market Stall.

You can see the full report here . What do you think about Bad Bunny and BTS leading the Spotify Wrapped 2021 statistics globally? Share with us what you heard the most in the year and remember to follow us on our social networks for more information on your favorite artists.

The Strange World of licensed Disney anime and manga

Platoon 3 will have benefits for Franchise Veterans