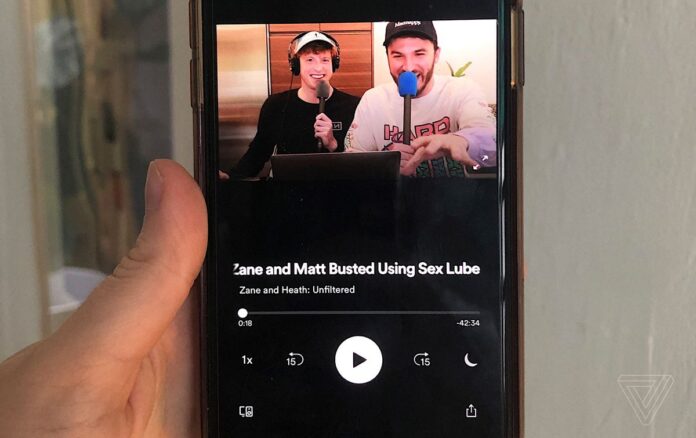 The online music platform Spotify is working on a new feature. The video podcast feature is being tested with two famous YouTuber.

Spotify, the world’s most popular online music platform, is preparing to add a new one to its services. Spotify, which has created special playlists for podcasts in the past weeks, is now running a test on the video podcast feature.

The video podcast project is run with two famous YouTuber Zane Hijazi and Heath Hussar. Meanwhile, two names produce content on the YouTube channel Zane and Heath: Unfiltered. According to the statement made by a source close to Spotify, half of the users will be able to see the videos. Videos; It will only come to the last three (podcasts 28, 29 and 30) of the podcasts published by the duo.

Video podcast move from Spotify:
Spotify tests have not yet been confirmed, but the ability to add videos to podcasts confirms this. Listeners will see the video at the bottom of their screen after clicking the play button. It is stated that the test, which is currently in its initial stage, will be in more podcasts in the future.

As you know, Spotify keeps playing your playlist in the background when you turn off your phone’s screen. The same feature will apply to video podcasts. The videos will be synchronized with the audio and continue to play even if the audience locks their phones. The feature can be used in desktop and mobile applications.

A Spotify spokesperson said, “We routinely run a series of tests to improve our user experience on Spotify. Some of these tests lay the groundwork for a better user experience, while others only serve as an important learning function. We do not have any other news to share at the moment, ”he said.

Spotify; Starting the tests with two YouTube stars is interpreted as an effort to excel against Google’s company. Users who want to take advantage of YouTube’s suggestion algorithm prefer this platform to upload their videos. It is not yet known whether the videos shared on Spotify will appear on Google searches.

Spotify wants to bring video podcasts to the platform to create an interesting option for a long time. When YouTube comes to the fore in video, time will show whether users will prefer Spotify on this.