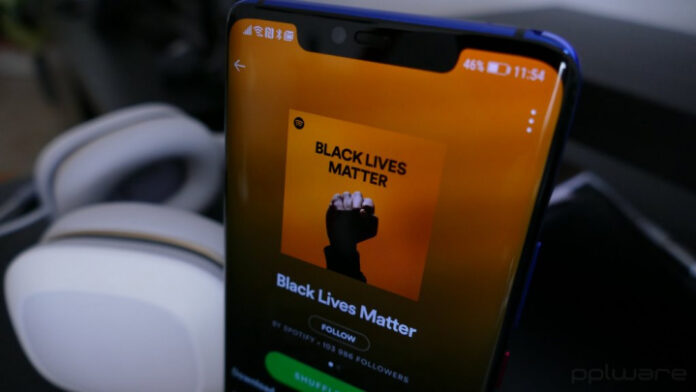 The music industry is now united in a movement to raise awareness of issues of racism and also as a way of paying tribute to George Floyd, who is being the face of this struggle.

#TheShowMustBePaused is the motto of this protest that brings together services like Spotify, Apple, Deezer and music channels like MTV and VH1, in addition to several artists.

The world was not indifferent to George Floyd

The assassination of George Floyd shocked the world and sparked huge waves of revolt and a war broke out. Large companies have a strong voice in front of many people and the music industry is one of the most powerful.

Thus, today a “blackout day” is being carried out by many companies associated with the industry. On the page #TheShowMustBePaused, dedicated to the movement, you can read that it was created to be seen as a day of reflection. And, above all, a day when the actions that can be taken to support the black community must be discussed honestly and productively.

Jamila Thomas and Brianna Agyemang, two successful black women in the United States, are the face of this campaign. They were associated with many companies in the music industry.

Spotify, Apple Music, MTV, VH1 and many others, united for this cause

Each company is taking its own actions today to make its audience stop and think about these issues of racism.

Spotify, for example, says that “this day (and every day)” will be supporting employees, friends, partners, artists and creators, in the fight against racism, injustice and inequality. As such, it is currently carrying out various actions, such as blocking playlists, music channels and podcasts, providing playlists such as Black Lives Matter, RapCaviar and Are & Be. Today’s Top Hits is also dedicated to this campaign.

In addition, during music playback, there will be a pause of 8 minutes and 46 seconds, which symbolize the time that George Floyd has been suffering.

Apple, through the Apple Music service, also joins the movement. Therefore, you will cancel your regular Beats 1 program today. In addition, it will redirect users to a streaming channel that celebrates the best of black music.

For 8 minutes and 46 seconds, we will go dark in tribute to George Floyd. We dedicate this time to the victims of police brutality and the powerful movement fighting for justice.

Many producers and publishers, namely from Portugal, are now stopped, also together in this protest.

Not everyone supports the movement

Despite these actions, there are voices from the industry that believe that these actions will do nothing for this fight for equality. They will do nothing to fight racism, let alone the black community. They also claim that the #TheShowMustBePaused movement itself is not being exposed in the right way and that little fruit can come from here, neither for the music industry nor for society in general.

Elon Musk hit the ground with his cryptocurrency wallet