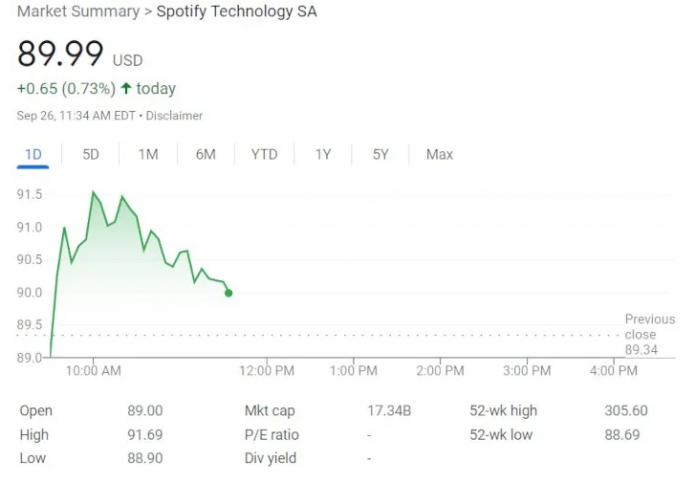 Spotify (NYSE: SPOT) shares recently hit a record low of $88.69 per share, and some are debating whether it’s time to invest in an audio entertainment company that was trading at almost three times the price in early 2022.
Spotify’s record low share price was reached just a few days after the Stockholm business announced the official release of audiobooks in the US, and just over a week after a rather positive assessment of the long-term potential of SPOT from Evercore.

(Of course, turbulence in the broader market is also causing a number of other stocks in and around the tech sector to lose a significant portion of their value.)

“And then they finally moved away from the heavy phase of the investment they had put into podcasting,” Evercore senior managing director Mark Mahaney said of his vision for Spotify stock. “All this is combined, I think, starting next year with an increase in gross profit. And then this year they had a user acceleration, which I think could turn into an acceleration of paid subscriptions next year or strong growth next year. I think you want to stay on Spotify for a long time before that happens, and that’s now.”

Meanwhile, Amsterdam-headquartered investment management company The Guardian Fund, which predicted in early 2021 that SPOT could reach the staggering $1,750 mark by 2030, remains confident in Spotify’s stock prospects despite a drop in valuation in 2022.

“Spotify is one of the cheapest and highest quality companies we know. During every major drawdown, there is yin and yang, where the opposite forces of falling prices and rising expected returns interact. While we’re at it, we’d welcome even lower prices. Why doesn’t the market sell us shares at $50 per share? Or for $25?” the 12—year-old firm wrote in July, announcing that it had increased its position on Spotify shares (from 14.2% to 15.2% of the portfolio) during the first half of 2022.

“In fact, our investment rationale is that audio content is significantly undervalued compared to video content,” The Guardian Fund clarified. “Audio is one of the last blue oceans, and until recently there was no technology to reveal more value. Spotify is well positioned to close that gap.”

In addition, it is worth noting that Morgan Stanley lowered its target SPOT price from $170 to $140 (with an inflated rating) at the end of July, while KeyCorp lowered its own target SPOT price from $210 to $146. Moreover, Marketbeat has determined the average target price of Spotify shares set by investors in published analytical materials over the past year at $183.42.

Despite these and other optimistic views on SPOT, in which CEO Daniel Ek invested $50 million in May, when the shares reached an all-time low, some financial experts offer comparatively critical assessments of Spotify shares and the cashing out of their assets.
Of course, by this point in 2022, various ETFs of Ark Invest founder and CEO Katie Wood had disposed of millions of dollars worth of Spotify shares, including 20,000 shares by early September.

At the time of this writing, Spotify shares were up slightly from Friday’s close and were trading at $89.99 per share. In addition to the aforementioned expansion into audiobooks, Spotify has lost billions on podcasting, and reports have reported that the company is overtaking deep-rooted players in this area.

In addition, CFO Paul Vogel believes that the profitability of podcasting is just around the corner. Spotify, which has also expanded into ticket sales and interactive apps, said it had 433 million users and 188 million premium subscribers at the end of the second quarter of 2022. The latest figure represents a 14 percent increase compared to last year.