Home Tech Spotify Launches Music + Talk, Its Format to Talk About The Music... 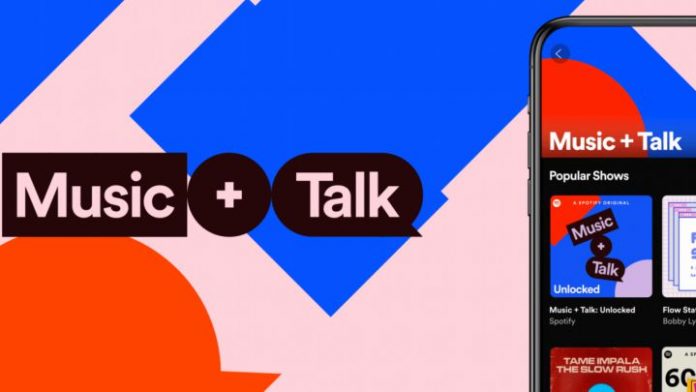 Spotify: Music applications on the Internet are the most common and surely Spotify is one of the most widespread of all those there. The firm has all kinds of content and it is a fact that now more than ever podcasts are prevailing. In the end, it is content created by users who want to show the world their knowledge or simply feel the radio experience like their favorite professionals. Now this experience is even better with the arrival of the Music + Talk feature.

More and more users share their knowledge on the Internet with the rest of the world in all kinds of subjects. It is true that YouTube is a good door to make yourself known and show the world that knowledge, but there are those who do not need more than a computer and a microphone to carry out this work. This is where Spotify focuses, but today we are going to talk about the content podcasts uploaded by indie artists.

It is a new feature that the firm makes available to everyone and its name is Music + Talk. Its shape is very similar to that of radio formulas programs, since each user can choose the songs he wants and make with them a program in the purest style of the commented playlists. Whether it is a thematic program dedicated to an artist or group or simply putting a series of songs on which to comment on something interesting, a program can be made on Spotify.

All part of the help of the Anchor app, which hosts this Music + Talk feature. Then you just have to connect your Anchor account with Spotify and then you can enter your playlists or the extensive library of the app and record what you need to create a new episode. The good thing about this function is that you have the possibility to do it from your smartphone or from the app on your computer if you have a higher quality equipment.

The good thing about the new Music + Talk function is that it is already available in our country. The tool already existed and was in operation, but in its latest update it increased its presence to 15 countries in different markets, including Spain and other European countries such as Germany, France or Italy, among others.