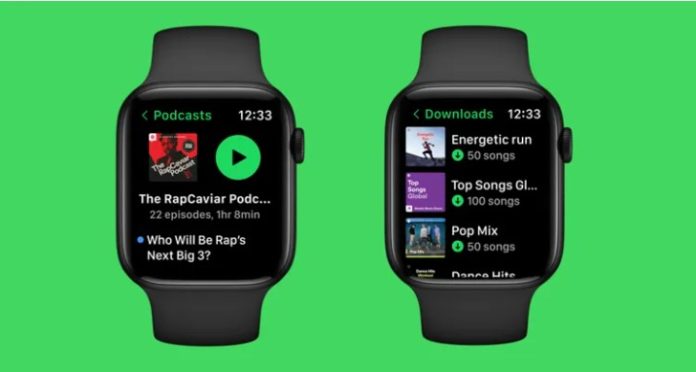 Spotify has finally realized that its simple Apple Watch app does more harm than help. The streaming giant has redesigned the app with new features.

The Spotify app for Apple Watch was hardly worth using before the update. The songs on the screen appeared in a text list, which made it difficult to quickly search for music. The latest update provides a more familiar user interface and also includes album covers. Spotify’s watchOS update app is being rolled out with a new Library view and detailed music controls.

Clicking on an album or playlist used to start playback immediately, but Spotify has changed this behavior. Now there is an additional screen with options for downloading and shuffling music. Spotify offline playback for Apple Watch appeared in May 2021, but this implementation was severely limited. Firstly, users still had to use their phone to select offline music, and only songs could be downloaded to the watch, not albums and playlists.

The latest update allows users to download playlists and albums without an iPhone. And finally, for podcast listeners, the app now remembers where you left off when you stop listening to an episode. The previous version always restarted the episode, which meant that you lost progress and had to make your way forward to find your old position.

All these changes are designed to make Spotify Apple Watch more competitive compared to Apple Music. Apple Watch owners have been complaining for years on Spotify community forums about some of the features implemented today. The redesigned interface should make the app more useful for everyone who uses the watch to listen to music.

Spotify’s experience with the Apple Watch has been minimal since 2018, when the app became available. It started life as a simple remote control option for music that is still streaming on the iPhone. Updates followed, which provided live streaming on the Apple Watch. This latest update finally gives users something worth using on a competitor’s platform.