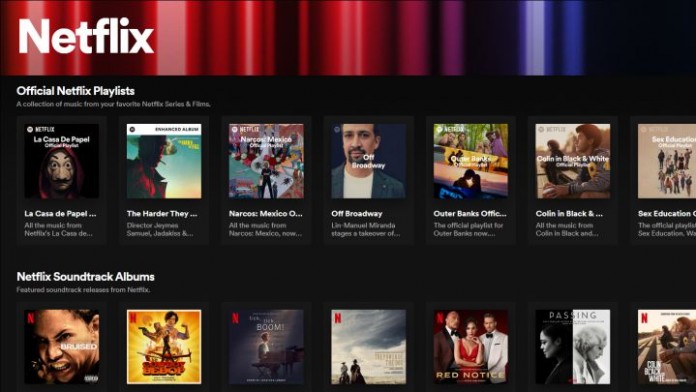 Spotify is one of the most important audio platforms in the world of technology. There are not a few users who enter every day to listen to the latest news from their favorite artists, or world news, or that new playlist in which they have put a lot of love. But some go straight for the soundtracks of their favorite series from their VOD service. Now, the prayers of many have come true with the new Spotify lists based on the Netflix series.

Soundtracks are also unforgettable melodies for many, surely you remember a song from a movie you’ve seen, or a version of a song that you like. Sometimes finding that piece of sound becomes a bit difficult to find if you don’t know who the performer is, but this will end with the new Netflix hub coming to Spotify.

Surely you know the VOD service, where series of the caliber of La Casa de Papel, Stranger Things or the Squid Game among many others have been born. And maybe of these three and the hundreds of more series that there are to choose from, there is one that you especially like its soundtrack. That’s what this new function of the audio social network is for, to find all the songs in one place.

You will have at your disposal on the Netflix Spotify hub a space where you will have access to all the official songs of your favorite series placed in playlists dedicated to each footage. But the best of all is that you will not only have access to all the official songs that appear in each series, you can also listen to official podcasts if you have them as with The Crown. You will also find some quizzes to make the user experience more fun and invite them to interact more with the application.

One more improvement after removing its autoplay

Netflix is ​​the new service added to the Spotify hubs. This service was already in operation with other firms such as Disney, which also have some of the best-known songs of all time. This novelty comes after the arrival of the order button that will bring the signature of the reproduction in order of all the albums that you want to start, leaving aside the random function that was active by default.

“The Young Avengers”: who has already appeared in the MCU?

How old is Nathan Drake in Uncharted Movie vs. Games?