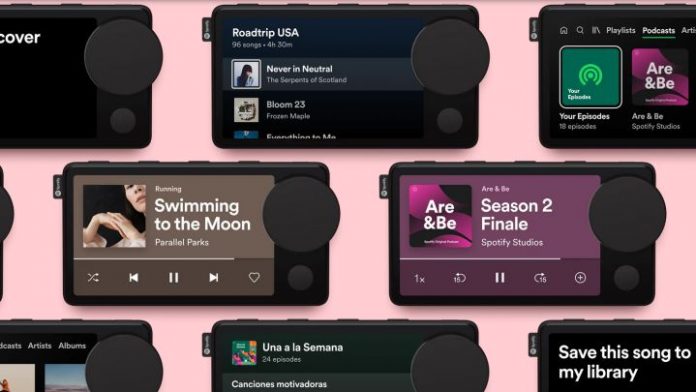 Spotify: We have been talking for a few months about the imminent departure of the first Spotify hardware. The type of device is not a music player that you can take anywhere, rather one that you can carry while driving. It seems that its final version has finally come to light, but only a few users have had in hand what Spotify Car Thing is like.

Spotify’s small screen for your car

When you get in the car it is very common to put the radio on. There are many stations at your disposal and you can choose the one that you like the most or that is more akin to your tastes. But sometimes you want to put only those songs that really accompany you on a daily basis and that, of course, you have in a personalized playlist. This will sound like you if you are a frequent user of Spotify, but now you will have a device for it.

And it is that the firm has been behind the launch of its first hardware. The prophecies that it would launch its first device this year seem real and we have finally seen how Car Thing works. According to The Verge, only a limited number of users have had access to the device, which consists of a screen with a button on the right side and a dial just above. In addition, it includes a support to place it in your car, so you will not have to worry about buying more devices.

According to the medium, the device has a somewhat strange connection and use. To begin with, it needs a constant power supply, so you will have to use the 12V power connector to give it power. On the other hand, it has to be connected to the Bluetooth of your car for it to sound since it does not include speakers. But the important thing is that Car Thing does not work on its own since it needs to collect your account information from the phone. Of course, among its features is the use of its newly launched virtual assistant hey Spotify.

Will it arrive in Spain?

One of the curiosities of Spotify Car Thing is that very few units have been released and all have been on demand in the United States and you only have to pay the shipping costs. This brand strategy is curious and we will have to wait to see it in Spain, although it is true that competing with a smartphone is difficult given its characteristics and usefulness.