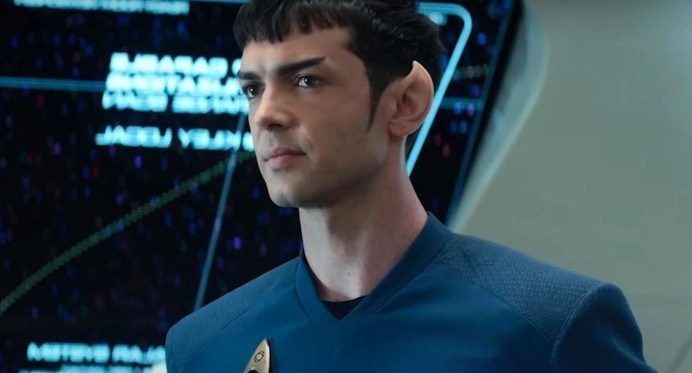 UPDATE — STAR TREK STATEMENT: “In Star Trek: Mission to Chicago, we inadvertently displayed posters with the wrong names of Spock and M’Benga. Sometimes, when you work at warp speed, mistakes are made. names, they haven’t been revealed yet.”

After a 56-year wait, the new “Star Trek: Strange New Worlds” posters have taken the unprecedented step of giving Spock an official full name. “Star Trek: Strange New Worlds” is the latest series of Star Trek spin—offs, telling about the adventures of Captain Pike, Lieutenant Commander Spock and the rest of the crew of the USS Enterprise. The premiere of the series is scheduled for May 5, when it debuts on Paramount+.

The action of “Star Trek: Strange New Worlds” takes place after the events of the second season of the series “Star Trek: Discovery”, which introduced viewers to new versions of the characters Spock, Captain Pike and Number One, and will also be a prequel to “Star Trek: The Original”. Series (CBT). The series was commissioned due to the positive response that the new versions of these classic characters have generated among Star Trek fans and the general audience, and it will aim to add more depth to their backstories. In addition, the show will feature characters such as Dr. M’Benga, Young Uhura and Nurse Chapel, as well as completely new characters completing the main cast.

Now, in a series of new posters unveiled at the Star Trek: Mission to Chicago event, Star Trek has added even more to Spock’s character than viewers could have imagined. Star Trek took the opportunity to provide Spock and Dr. M’Benga with an official full name. New posters with characters depict a couple in uniform on a huge background, and their full names are stamped above the Strange New Worlds logo. Posters show that Spock’s full name is S’chn T’gai Spock, and Dr. M’Benga’s name is Jabilo— a little easier to pronounce of the two. Check out the two posters at the link below:

The opening will be a real surprise for long-time viewers of “Star Trek” and will certainly cause a lot of discussion, not least regarding pronunciation. Previously, the only canonical mention of Spock’s full name was when the half-Vulcan told Leila Kalomi that his name was unpronounceable in the TOS season 1 episode “This Side of Paradise”. Some viewers may disagree with the exposure because of the answers to questions that don’t need to be answered, but the names weren’t taken out of thin air, and both are taken from the Star Trek novels, even though they are only now the official canon.

A bold decision could set the tone for a series that seems intent on changing the style of modern Star Trek. The Star Trek: Strange New Worlds team promised viewers that the series would return to the episodic roots of the franchise, based on the optimism of Starfleet, but at the same time retain some smaller-scale story arcs. Even with this change to Spock’s new official name, it may take some time to get used to it, as viewers wonder what other surprises Star Trek: Strange New Worlds has in store.