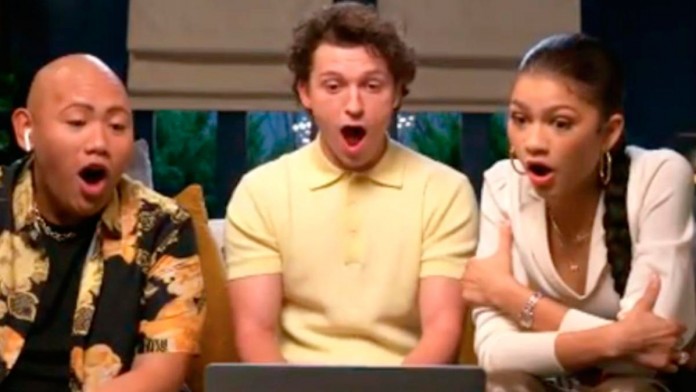 Spider-Man No Way Home: Three of the protagonists of the new spider film from Marvel Studios and Sony Pictures react to the second trailer that will be released this morning. Spider-Man: No Way Home is one of the most anticipated films of the year and of recent times; So much so, that the expectation for the second trailer that will be broadcast this morning from Tuesday to Wednesday in peninsular time (at 2 am to be exact) is maximum, even dedicating a small event with surprises to be announced from Los Angeles. A few hours away from what appears to be the definitive trailer for Sin Camino a Casa, its three main protagonists, Tom Holland, Zendaya and Jacob Batalon (who play Spider-Man / Peter Parker, Michelle “MJ” Jones and Ned Leeds, respectively) , have reacted to the long-awaited trailer through a video published by Sony Pictures. And the emotion is real.

Reaction to the second trailer of Spider-Man: No Way Home

Thus, the three actors have stood in front of a camera to share their excitement at seeing the second trailer for Spider-Man: No Way Home for the first time, all through a laptop that obviously does not show the screen to camera. And despite the fact that practically all the reactions of the protagonists are exclamations of excitement and surprise, they do offer us some clue of what they may be seeing.

“This is hard”, exclaims Tom Holland before a supposed emotional scene or “What great stars, my God!”, Exclaim Zendaya and Jacon Batalon before a scene in which it is understood that they participate. The reaction ends with a phrase from Batalon in which he assures that “I was hysterical when I saw this part, oh my!” What scene will the actor refer to? Perhaps to the total opening of the Spiderverse with the presence of two exceptional guests? We will still have to wait a few hours to react to trailer 2 of Spider-Man: No Way Home as its protagonists have already done.

“For the first time in the cinematic history of Spider-Man, our hero, neighbor and friend is unmasked and therefore no longer able to separate his normal life from the enormous risks that being a Super Hero entails. When he asks Doctor Strange for help, the risks become even more dangerous, forcing him to discover what it really means to be Spider-Man ”, we can read in his new official synopsis.

Vikings Valhalla: The true story that inspired the plot of the...