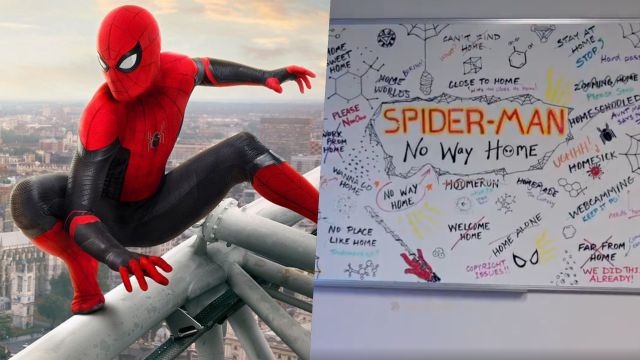 Tom Holland and company reveal the title of the third installment of Spider-Man in cinema: No Way Home. The rumors have ended with a small teaser.

Spider-Man: No Way Home. This is the title of the new installment of Spider-Man on the big screen. Following several leads, Tom Holland and his co-stars have shown the public what we will call their next work. It will be available in theaters during the upcoming Christmas season.

No fake titles: No Way Home is real

Its protagonists have played absent-mindedness through their personal social networks. Phone Home, Home Wrecker, and Home Slice are just a few of the examples Holland, Zendaya, and Jacob Batalon have shared in recent weeks. Given the quality of the logos, some users believed it was real. However, it was all part of a trick.

The small teaser that accompanies the ad hides a lot of nods to that promotional action. Around the blackboard we can find a multitude of titles as a sketch. Home Seeet Home, Close to Home and the nod to Far From Home: “This one we already did”, you can read.

We recently knew the first images of the work on the film. About the filming, it seems that a large set is being built that could host a great confrontation. This coincides with the statements of Tom Holland, who assured that this third installment of Spider-Man is the most ambitious in the history of individual superhero films.

With regard to Spider-Man in the video game world, the new installment of the Insomniac saga accompanied the launch of PS5 at the end of 2020. Under the leadership of Miles Morales, this spin-off as a sequel confirmed its success with solid numbers: more than 4 million units have been sold between the last generation and the current one. Morales also shows muscle away from the influence of Peter Parker. You can read our analysis here.