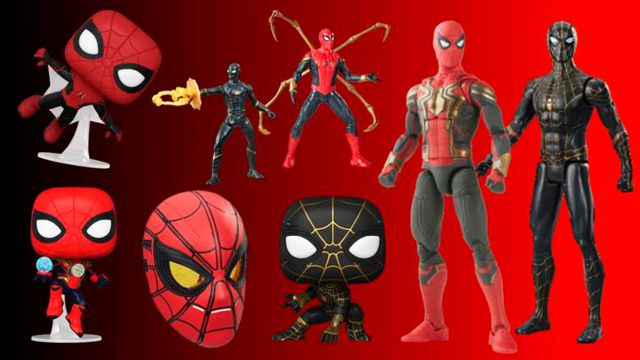 Spider-Man: No Way Home: Marvel offers a first official look at the merchandising of its new film with characters such as Spider-Man or Doctor Strange; premiere in December.After the first leak of the new Spider-Man suit through the first Lego sets based on Spider-Man: No Way Home, Marvel itself has published an official article on its website with the entire line of official merchandise for the film, including Funkos, action figures and other toys with great detail of their main characters, that is, Spider-Man, Doctor Strange, MJ, Ned or JJ Jameson, thus offering a fresh look at Spidey’s new outfits.

From the new Funko Pop! to the new Marvel Legends collection, as well as different toys such as action figures, vehicles, a mask and even a Spider-Man-style spray-throwing glove. Although the most striking of all is the unexpected advancement of the appearance of the characters, especially of the new Spider-Man suits, something that could well have been one of the claims of the trailers or even the film.

Although Marvel has not specified that the designs shown are the end of the film (since they are sometimes modified for the final premiere), it does give us an idea of ​​where the shots will go. A version of Spider-Man with accessories from Doctor Strange is striking; What surprises will Spider-Man: No Way Home bring us?

Apparently, Spider-Man will equip up to three suits with different designs, one with a more classic cut, another reminiscent of the Iron-Spider with the arachnic logo in gold, and another in black with the gold mesh. In addition, we see the aspects of other characters like MJ, Ned or J.J. Jameson, in addition to a Doctor Strange who apparently will not change his appearance much compared to other films.

We leave you with some of the new images distributed by Marvel. Spider-Man: No Way Home opens in theaters on December 17, 2021.