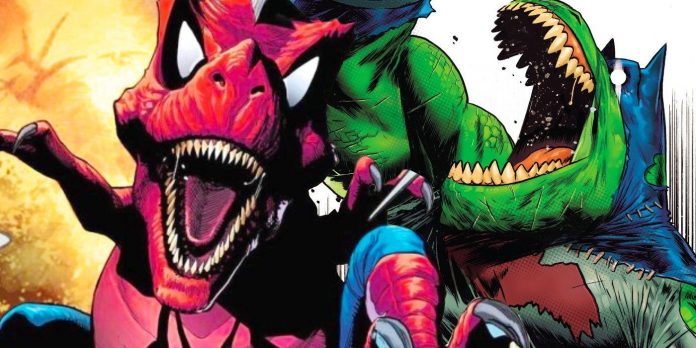 Warning! Contains a preview of Edge of Spider-Verse #1.

In a new preview of Marvel’s Edge of Spider-Verse, it looks like Spider-Man wants to experience all the awesome dinosaurs that the DC Justice League has already enjoyed. In what has become a staple of the multiverse comics, there is always a reality in which dinosaurs still reign supreme as sentient copies of classic superheroes. To that end, Marvel is teasing a world in which Peter Parker is a spider-themed Tyrannosaurus Rex.

By a funny coincidence, DC is currently publishing Jurassic League, a miniseries from Juan Gedeon and Daniel Warren Johnson featuring classic Earth heroes like Batman and Superman instead of Batsaurus and Supersaurus. Forming your own prehistoric team of heroes to fight the Stegosaurus version of Darkseid is an epically ridiculous dinosaur–themed adventure. Now it looks like Marvel Comics is following suit in the upcoming Spider-Verse event.

Related: Because of the wild redesign of the Justice League, Batman looks pathetic

As you can see from the new preview of Edge of Spider-Verse #1, one of the stories by Carla Pacheco and Pere Perez has the appropriate title “Rex the Spider!!!”. Thanks to a red and blue tyrannosaurus with white eyes that match the iconic Spider-Man mask, it looks like “Pter Ptarker” is fighting his own wild version of the Green Goblin in this new story. Here are the preview pages and synopsis (which also tease other exciting spider heroes):

EDGE OF SPIDER-VERSE #1- SOMETHING EVIL IS COMING THIS WAY / HERO INSIDE / SPIDER-REX!! / MY LADY… MY DESTINY THE END OF THE SPIDER VERSE IS COMING! edge (’ej) noun – 1. the extreme limit of the object. – 2. the sharp side of the blade. The cutting edge of Spider-Verse has brought you Spider-Gwen and Peni Parker. This last edge will introduce you to some of the most important characters in the future of Spider-Verse… but it will also cut the last thread of the web. IN THIS ROOM: SPIDER-MAN NOIR! THE NEW STATUS QUO OF ARAÑA! SPIDER-REX AND MORE!

Teasing stories with Spider-Man Noir, Spider-Laird and Arana, it looks like this new anthology series will be chock-full of epic spider-stories in preparation for the upcoming End of the Spider-Verse event, which will threaten the Web with the Life and Fate that binds all these Spider-Variants. However, it definitely seems that the new Spider-Rex will be the star of the first issue of the stories. After all, what’s not to like about a giant red tyrannosaurus that might have spider sense?

In general, it’s hard to make a mistake with super-powered dinosaurs. The fun of Spider-Rex being the secret identity of “Ptar Ptarker” is already a hilarious victory just in this preview. Taking the DC version of the Dinosaur Justice League as a basis, chances are good that this prehistoric Spider-Man will quickly become a fan favorite hero when the full issue is released on August 3.