Home Entertainment Spider-Man and raids: We tell you what Marvel’s Avengers has in store 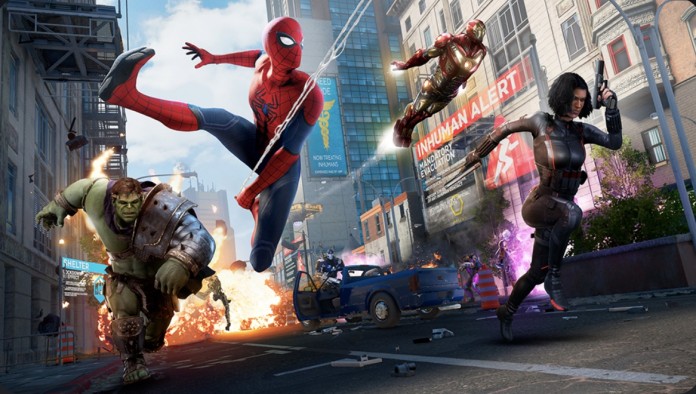 A new hero is on the way
The path of Marvel’s Avengers has not been easy. After receiving mixed reviews for its gameplay mechanics and various bugs at launch, the game has tried to get back on track by adding new and varied content. In the past we’ve seen new heroes arriving like Hawkeye, Kate Bishop, and Black Panther, and now it’s Spider-Man’s turn to join the Avengers.

From the beginning it was known that Spider-Man would come to Marvel’s Avengers in the form of DLC. However, only players on PS4 and PS5 could get it. Now, after just over a year of waiting, the friendly neighbor will finally arrive at this title on November 30. We had the opportunity to chat with the developers behind it and we shared with you some of what we can expect with this new character.

On November 30, the Hero Event: With Great Power will take place, which will allow Marvel’s Avengers players on PS4 and PS5 to take control of Spider-Man. Here we will have a short story in which the arachnid hero must unite with the most powerful heroes on Earth to stop the new plans of A.I.M.

Spider-Man arrives with his own arsenal of movements that seek to make us feel like him. His way of fighting has him using his nets and his agility to take down the villains in a pretty mixed way. You can attack from a distance with his nets and use them to shorten distances between himself and his enemies to get more ‘physical’ with them.

Hero nets also serve another function in Marvel’s Avengers, helping to increase an effect bar on enemies. If you shoot enough, you can make your opponents get entangled without the ability to move and thus knock them out easier.

In addition to combat, Spider-Man traverses the map with the movements we always expect of him: swinging with his webs and climbing the walls. According to his programmers, this was one of the hardest thing about getting this hero into Marvel’s Avengers: getting his move right. They had already had experience with Kamala’s arms and Black Widow’s hooks, but Spider-Man’s webs presented a new challenge, which the team was happy to face.

A new version of the character

For Marvel’s Avengers, Crystal Dynamics decided to give us a not-so-experienced and young Spider-Man compared to other video games. Also, here we will see that he will have a somewhat close relationship with Black Widow and Kamala Khan. With the latter, the developers decided to do it because of their similarities: they are both young heroes who recently acquired their powers and must learn the responsibility it means to have them.

This version is also a bit reluctant to join the well-known superhero team, as Spider-Man is used to working on his own and without revealing his identity. However, the threat of A.I.M. He’s big enough to face alone, so a group of super friends doesn’t hurt.

Just because Marvel’s Avengers show us a new version of the superhero does not mean that they will leave behind all their years of history, as it will come with a huge series of aspects. According to his programmers, they chose quite a few of his most iconic costumes, but they also added some that are sure to take the most avid fans by surprise.

To find out what interaction Spider-Man will have with the Avengers, how they will stop A.I.M. and his wardrobe, feel free to jump into Marvel’s Avengers on PS4 and PS5 on November 30. In addition to the arrival of Spidy, Crystal Dynamics has some new additions in store to keep you playing.

On the same day that Spider-Man arrives, players on all consoles will have access to a new raid called Discordant Sound. This addition to Marvel’s Avengers will put players to battle once again with the mighty Klaw and will also serve as a conclusion to the events of the War for Wakanda expansion.

With this new raid, some puzzle-solving elements were added, and the developers of Marvel’s Avengers want to push players to work together like never before. It might get tricky, but they added a few items that will make your effort worthwhile.

On the side of working together, players will now be encouraged to take a role within the team so that they can easily overcome whatever the game throws at them. Spider-Man could function as a support that is immobilizing the enemies, so that the Hulk arrives with all the strength of him and ends them.

Since the raid is post-game content, Crystal Dynamics decided to increase the level you can reach. Now all your heroes can reach level 175, which cual will not be easy, but you will have many options to continue gaining experience. Will they return to maximize all of their Marvel’s Avengers heroes?

WhatsApp: MP Alerts About Coup That Uses Name Of Promoters