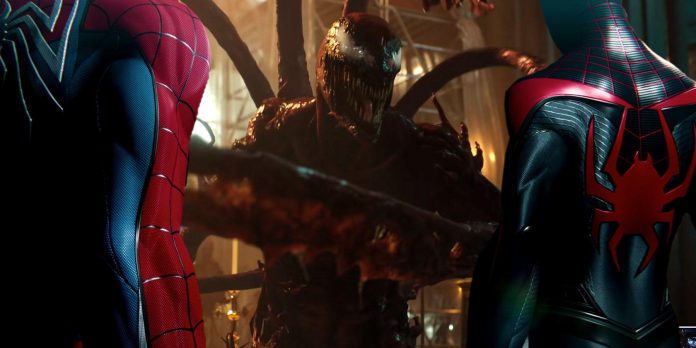 The trailer for Marvel’s Spider-Man 2, unveiled at the PlayStation Showcase last September, confirmed that Peter Parker and Miles Morales will fight against Venom in the sequel. Although there are many rumors surrounding the disembodied voice in the trailer, fans know for sure that Venom promises to be an equal or greater threat than the narrator talking to them. It goes without saying that the black symbiote will prove to be a serious opponent for the two Spider-Men.

The introduction of Venom into the Spider-Man universe by Insomniac Games has a lot of weight. Firstly, it confirms fan speculation that Norman Osborn used an alien symbiote to cure his sick son Harry in Marvel’s first Spider-Man. This would mark a radical change in myths, making Harry Osborne the host of Venom instead of Eddie Brock. The addition of Venom also means that the symbiotes will begin to play a more important role in the overall story, which may include the appearance of characters such as Scream, Toxin and Carnage in the future.

RELATED: Rumor: Marvel’s Spider-Man 2 Co-op May Have Been Confirmed

One big family of symbiotes

You can’t mention Venom without Carnage. A descendant of Venom, Carnage became a sworn enemy of his father, as well as an opponent of Spider-Man. Carnage is so powerful that he was able to force both Spider-Man and Venom to put aside their differences in order to defeat a stronger enemy. Unlike Venom, who has a moral compass, Carnage is most fond of killing for fun; which makes him a dangerous opponent with whom it is impossible to negotiate. There is so much knowledge and storytelling around Carnage that it would be impossible to fit it all into a game that also features Venom and other unnamed villains.

It is for this reason that Carnage should not be the focus of Marvel’s Spider-Man 2 villains. Adding another villain to a game with multiple antagonists decentralizes the plot and gives the villains less time to prove themselves. Given that fans of these characters want to be given their due, it would be in the best interests of Insomniac Games to keep such an important villain for another game or DLC.

Oversaturation of patients with megalomania

Not that there wasn’t a glut of villains before, because there were a lot of them in the first Marvel Spider-Man. Aside from Mr. Negative and Dr. Octopus, whose backstory was revealed throughout the game, the villains in Marvel’s Spider-Man were mostly superficial obstacles to Spider-Man. Enemies such as Kingpin, Electro, Rhino, Scorpion, Vulture, Shocker, Taskmaster, Weirdo and Tombstone were largely forgotten, given the lack of screen time and the way they were written. It’s a shame, considering that the villains in the comics have as many stories as other, more specific opponents in Marvel’s Spider-Man.

Instead of repeating what was in the first game, Insomniac Games should focus on reducing the number of villains in Marvel’s Spider-Man 2. This will give developers more time to make each villain feel like a character with depth and motivation. Since every villain is a reflection of the dark side of Spider-Man (this is especially true for Venom), Marvel’s Spider-Man 2 should focus on the nuances of how to be a hero, and the fact that no one can be as pure-hearted as they meet.

While adding Carnage to a game revolving around such themes is not a bad idea, Insomniac should create a character throughout Marvel’s Spider—Man 2. This can be done similarly to how Harry Osborne was created in the first Marvel’s Spider-Man. through in-game hints, dialogues and the scene after the credits. Venom itself can be used as a storytelling medium. By showing Venom’s ferocity and his capacity for evil, Insomniac Games can sow the seeds of fear before revealing that Carnage is even worse than its parent symbiote. This will make Carnage look more of a threat and greatly promote his transition into the spotlight for a DLC or sequel.

Carnage has huge potential as a Marvel Spider-Man villain, but it would be wasted if they were added to a game that already has a symbiote antagonist. It would be better to firmly establish Venom as a character before adding any of his relatives to the mix. This would prevent a glut of symbiotes in the Marvel Spider-Man universe and leave enough room for other villains to get a chance to defeat Spider-Man.