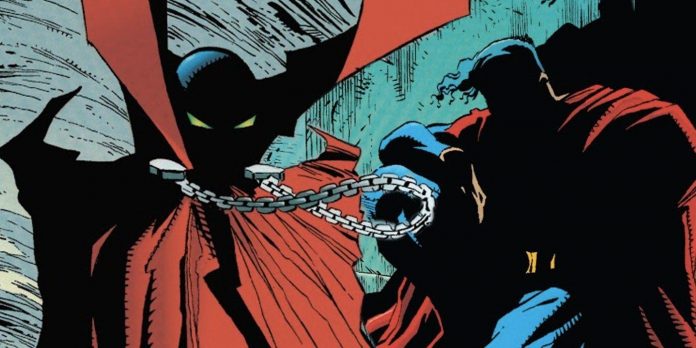 Even before Spawn met Batman, the iconic Image character had a secret DC-Marvel crossover in which he possessed the power of Superman. After a battle with Angela, the hunter of heaven, Spawn finds himself in the Seventh Sphere of Hell. Inside, he discovers a mysterious prison, which, as it turns out later, is full of famous comic book characters. When his powers don’t seem to break through, the imprisoned characters offer their strength, one of them is one of the most famous and recognized characters of all time, Superman.

When Spawn tries to use Angela’s thrown spear after their battle, the weapon releases some kind of fail-safe mechanism that causes Spawn to disappear, teleporting him to hell, where he enters a Sphere known simply as Erebus. He discovers that there is an ancient but still stable prison opposite a row of prisoners with hoods on their faces. Realizing that a guest has come to them, the prisoners are drawn to Spawn not out of hostility, but with the hope that he will be able to free them. Although only one hand is visible, it is clear that the prisoners are well—recognized DC and Marvel characters, both heroes and villains, trapped for an unknown period of time.

In “Spawn #10” by writer Dave Sim and artist Todd MacFarlane, Spawn uses all his powers to try to free them, throwing any warnings about the consequences to the wind. The mind of former Al Simmons is filled with hundreds of thousands of voices offering their strength in the hope that it will be enough to break through. One of these voices, although his face is not visible, belongs to Superman, whose voice both calms and inspires Spawn. The hero named “The One Who Came First” offers his strength and convinces Spawn to do it now or never, ending their brief communication with a wink and a smile, to which Spawn responds with a respectful nod under the mask.

Despite the fact that this story is considered non-canonical in the Spawn universe itself, it does not make either the appearance of Superman or the transfer of power to them less significant. Although he could not be depicted in full, the creators of the issues give enough hints, both verbal and artistic, to make it clear who Spawn is talking to. Superman is not only one of the greatest and most recognizable DC comics heroes, but also one of the first superheroes of the comic book genre. His powers essentially make him a god in his world, so adding that to the influx of Spawn’s unfathomable power would make Hellspawn one of the most powerful characters in comics, period.

Although Spawn’s strength is at a level he could never have imagined, his explosive efforts do nothing to destroy the prison or free his captives. The former cheerful Superman goes to his cell, where he ominously pronounces “Judgment Day”, hinting both at the creature that shamefully killed him and at the futility of hopes for freedom. Writer Dave Sim, whose most popular work “Cerebus” also appears, uses the comic as a critique of creators’ rights in the comic book industry, where hooded figures represent creators who sold their rights for money and now suffer when they hear. their creations were mourned in captivity. This won’t be the last time Spawn will cross paths with other DC characters (although he doesn’t have an official Marvel crossover yet), but one can only imagine what would happen if he met Superman again, and if they were enemies. or allies.