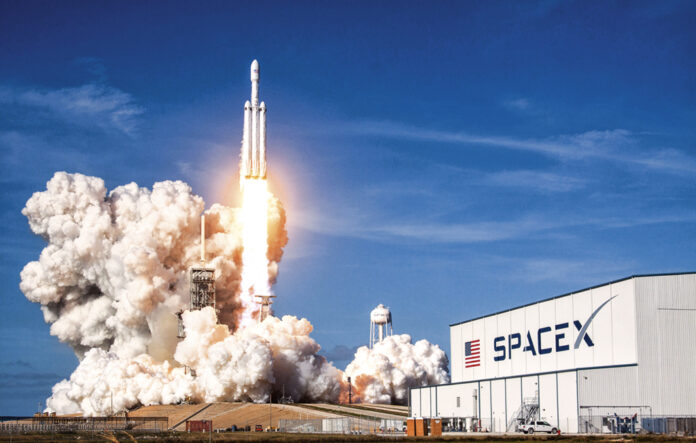 The historic SpaceX mission with two NASA astronauts on board has already departed for the International Space Station. Despite long hours of uncertainty due to weather conditions, the weather did end up helping and the green light was given for the take-off at 8:22 pm from mainland Portugal. Bob Behnken and Doug Hurley are expected to reach their final destination in 19 hours.

At this point, the Falcon 9 has already passed the Max Q condition, the point of an ascension route through the atmosphere where the rocket is exposed to maximum mechanical pressure. It is a very critical phase to check the reliability of the rocket design. And passed the test.

The first stage, which is reusable, has also landed upside down on the “Of Course I Still Love You” platform in the Atlantic Ocean. When the astronauts felt the most powerful G-Force on the course, the spacecraft traveled at nearly 27,000 kilometers per hour en route to the Space Station. Now, Dragon is alone in space and has entered microgravity.

Falcon 9 booster has landed on the Of Course I Still Love You droneship! pic.twitter.com/96Nd3vsrT2

The moment when the Dragon spacecraft separated from the second stage of the rocket was also captured on video. Now the SpaceX module with two astronauts on board is on its own on its way to the International Space Station. Since Bob and Doug is automatic in virtually all controls, they will be able to sleep and rest until they reach their destination while the ship takes them there.

Crew Dragon has separated from Falcon 9’s second stage and is on its way to the International Space Station with @Astro_Behnken and @AstroDoug! Autonomous docking at the @Space_Station will occur at ~10:30 a.m. EDT tomorrow, May 31 pic.twitter.com/bSZ6yZP2bD

The moment when the astronauts said goodbye to the family

Minutes before arriving on the rocket, Bob Behnken and Doug Hurley, already equipped with space suits prepared by SpaceX for NASA astronauts, talked to Jim Bridenstine (NASA administrator) and said goodbye to the family. Bob left a message to his son: “Behave yourself, don’t give your mother problems.”

Unable to touch the women and children, they raised their arms and put their hands together, simulating a hug. “Goodbye, guys,” Bob and Doug said to the families. Inside the Tesla, Doug stretched his gloves and allowed his son to touch her for the last time before the flight.

"We always think about the technology and the rockets, but this is what it's all about. The families coming together." @Astro_Flow comments on this touching moment as the families of @AstroBehnken and @Astro_Doug say goodbye as they depart for the Launch Pad: pic.twitter.com/xdfPv3IXYj

US President Donald Trump watched the takeoff at the Kennedy Space Center aboard Air Force One. Trump was one of the few people to watch the rocket take off live, as the usual gatherings were banned because of Covid-19 . The last president to attend a launch had been Bill Clinton in 1998 with the Space Shuttle Discovery.

The weather problem in the SpaceX mission

Until a few minutes before launch, there was no guarantee that the mission would really take off this Saturday. The assessment of the 45th US Air Force Meteorology Squadron went so far as to say that there was a 60% probability of adverse weather conditions to launching into space. The flight authorization could have withdrawn at any time.

205p: Radar shows showers and storms from Interstate 95 to the Space Coast. If this can clear by 245p, maybe #SpaceX launch can go. Will be down to the wire. pic.twitter.com/YWnvDrHeUp

These are not strange circumstances and Doug Hurley himself reminded him on Friday, in a tweet about the times he traveled on the Space Shuttle to space: “On my first flight, STS-127, on the Endeavor shuttle, we tried five times to over a month because of technical and climatic challenges ”. Bob Behnken had a similar experience: “During my last Space Shuttle mission, time also caught up with us.”

Dropouts were even a topic in the two astronauts’ conversation with the NASA administrator, Jim Bridenstine said later in an interview: “Bob thinks Doug is the problem,” he said with a laugh. But the real problem is simply time, Jim continued: “We are in Florida in the middle of May, we are going to have to try.”

According to the agency’s administrator, the weather was better than on Wednesday, when the first attempt occurred, but with some atmospheric formations that could have translated into thunderstorms. It is not enough that the weather above Falcon 9 is in perfect condition: it is necessary that, in the places where the ship will fall in the event of an accident, the weather must also be safe.