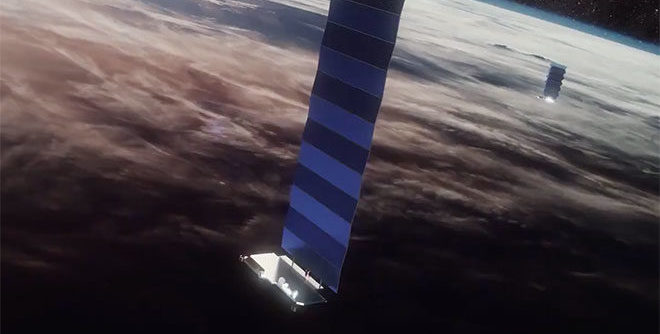 As part of SpaceX’s massive satellite network, 60 new satellites were launched into the atmosphere. Thus, the total number of Starlink satellites in the company has reached 300. SpaceX missed the rocket landing, an important step in the fourth flight of this year.

SpaceX’s project to build a satellite network consisting of thousands of cubic satellites to create a worldwide internet network continues at full speed. Although experts state that this work will be problematic, SpaceX does not intend to stop.

The company launched a Falcon 9 rocket from Cape Canaveral Air Force Station in Florida. Launching could be done with a delay of 24 hours due to a problem with the pressure valve. The fog, which poses a risk for takeoff, was scattered just before take off.

SpaceX couldn’t catch the rocket:
After successful launch, the rocket was attempted to be caught in the Atlantic Ocean with SpaceX’s long-distance landing platform “Of Course I Still Love You”, but failed at the first stage. If the landing was successful, SpaceX would have successfully captured a landing rocket for the 50th time.

According to SpaceX’s statement, the Starlink task was registered as the 80th task performed by the company. Lauren Lyons, one of the company’s engineers, said it was obvious that they were unable to land this time.

The firm said the rocket had a ‘soft landing’ near the ship. According to SpaceX, the rocket landed in the sea as a single piece. As the cause of the landing problem, changes were made to orbit due to satellites. SpaceX CEO Elon Musk said that 400 satellites are required for minimum coverage and 800 satellites for average coverage. In addition, the CEO previously tweeted on Starlink. It is stated that the company will activate the Starlink network this year.

Dexamethasone: ‘The first drug to reduce mortality so far’ in the...