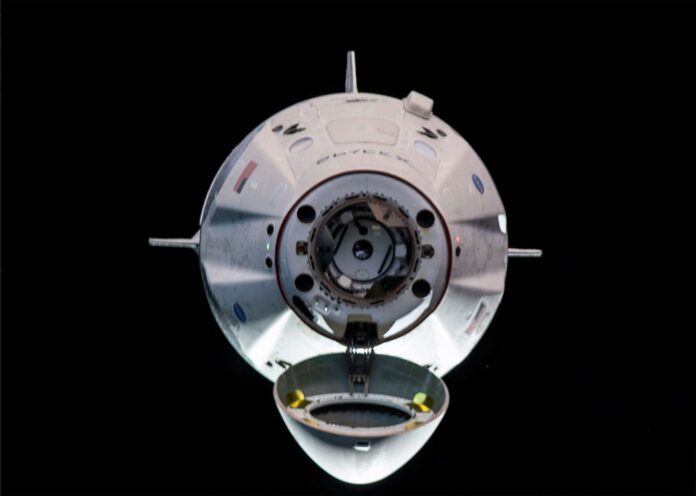 19 hours after its launch, the SpaceX Crew Dragon safely docked with the International Space Station on Sunday, a few minutes ahead of schedule. Unlike Dragon freighters, which are caught by the robotic arm before being docked at the orbital complex, the Crew Dragon’s autopilot system performed this maneuver itself.

Docking confirmed – Crew Dragon has arrived at the @space_station! pic.twitter.com/KiKBpZ8R2H

After verifications of tightness, adjustments and compatibility of the Crew Dragon with the Space Station, the capsule hatch was opened three hours after its arrival. The two NASA astronauts, Bob Behnken and Doug Hurley then entered the orbital complex.

This is the first time in human history @NASA_Astronauts have entered the @Space_Station from a commercially-made spacecraft. @AstroBehnken and @Astro_Doug have finally arrived to the orbiting laboratory in @SpaceX's Dragon Endeavour spacecraft. pic.twitter.com/3t9Ogtpik4

NASA has still not communicated the duration of their mission on board. However, it seems that its duration will depend on the progress of the preparation of the next crew and the availability of the vehicle that will transport it to the Space Station. Although the Crew Dragon can stay moored for several months, it is unlikely that the two astronauts will stay that long.

Indeed, as they have not prepared scientific experiments on the ground to carry out on board and they have not undergone training to perform specific tasks, their presence should be limited to the only activity related to the certification of the vehicle, assistance with carrying out experiments in progress, or even carrying out small maintenance and maintenance work on the Space Station.

MIUI 12.5: What The Interface Offers?