Home Tech A Source in a Deep Space is Signaling the Earth with 16-Day... 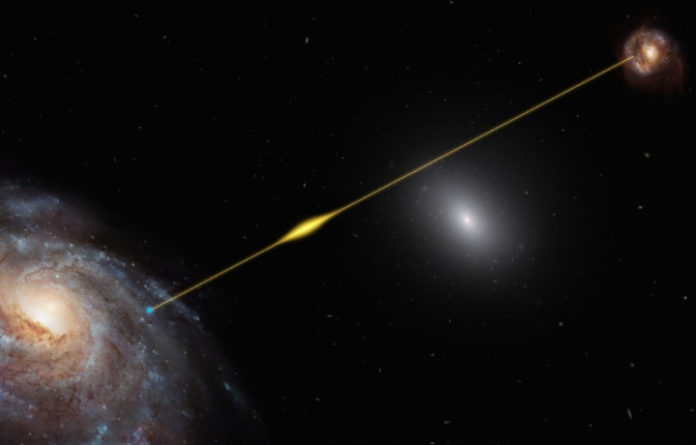 Scientists have discovered a fast radio burst reaching Earth with a fixed cycle. The signals of the newly discovered fast radio explosion reach the Earth in 16-day cycles. The mysterious signal comes to Earth from another galaxy.

In a new study, it was determined that signals were sent to the Earth in 16-day cycles from a source located in a galaxy 500 million light years from Earth. Scientists can take an important step in finding the source of fast radio bursts (FRB) through these signals.

Fast radio explosions are one of the most important events that attract scientists about the mysteries of the universe. The first fast radio burst was discovered in 2007. Scientists who made the discovery in 2007 were unsure of exactly what rapid radio bursts were. Fast radio blasts can happen once or repeatedly.

Between September 2018 and October 2019, scientists from CHIME / FRB discovered a repetitive fast radio burst signal using the CHIME radio telescope in British Columbia. In the first period of the study, it was observed that the signals reaching the Earth in 4-day periods started to reach the Earth in 26-day periods. The study on the signals revealed that it actually reached Earth at 16-day intervals.

The researchers have published the results of their work on the FRB signal on arXiv. In the published article, it was stated that the detected signal was the first FRB signal that reached the Earth periodically. “Finding a period of 16.35 days from a repeating FRB source is an important clue to the nature of this object,” the researchers said.

Although there is information about the source of FRB signals, there is very little information about the signals. An article published by another team reviewing the data obtained by the CHIME / FRB team shows that a binary system containing a large star and a super dense star core known as a neutron star may also be responsible for the signal. However, these signals may also be emitted periodically by large stellar streams.

Another scenario is that the FRB signal is created by another object and sent directly from the source. Scientists have previously said that some glare from highly magnetized neutron stars called magnetars may be the source of FRBs. However, since the magnetons tend to spin every few seconds, the 16-day period does not match this phenomenon.

The CHIME / FRB team hopes to find similar patterns to see if these loops are common. The researchers will also continue to watch FRB 180916.J0158 + 65 while it is still active to obtain other information on fast radio bursting.

Fast radio bursts have been keeping scientists busy for more than a decade. Teams like CHIME reveal new details about this strange event every year. The periodic repetitive signal discovered now can provide important guidance on fast radio bursts.

Xbox: Microsoft Is Looking For Ways To Keep Games When CMOS...

A new type of DRAM was developed to enable PCs to...