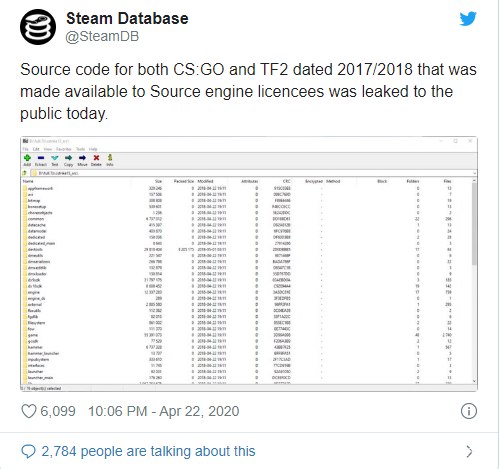 The source codes of Valve’s two games, CS: GO and Team Fortress 2, which have large players, have leaked. These codes can bring some security issues.

The owner of Steam, Valve’s games with large players, announced that the source codes of Team Fortress 2 and Counter-Strike: Global Offensive have been leaked. Although the files of these source codes, which are not publicly available, seem to be from years ago, they can become very harmful in the hands of software developers who want to access users’ information and especially develop new cheats.

Some fan servers have announced that these leaks will remain offline for a while so that they do not compromise the safety of the players. So far, it has not been possible to find out who decoded these source codes. Source codes for 2017/2018 were originally noticed in 2018 by Tyler McVicker, owner of Valve News Network, and Valve was informed about this.

According to some rumors, the source of the leak is Tyler McVicker; however, he denies these claims and states that he will forward all the information he has to Valve. According to another claim, the source of this leak is the former partner of McVicker. No matter who the source came from, the source codes of these two games may have been taken over by some harmful people. This also supports cheat events that have not been resolved in CS: GO for years.

Can create vulnerabilities
The emergence of these source codes is not only an advantage for cheaters. It can also cause more important security vulnerabilities, such as access to the personal information of gamers. For this reason, some unofficial servers decided to close down until this problem disappears completely.

This is actually not the first time that has happened to Valve. Before, the source code of another company, Half-Life 2, was leaked before it was released. Valve has not yet made a statement on this subject. According to the company statement, we will see more clearly how the source code will pose a danger.

Update: Valve made a statement on CS: GO’s official Twitter account regarding the issue, explaining that the source code in the middle was already shared with the partners in late 2017, no worries. The company announced that they are reviewing the leaked code and that it is always necessary to play games on official servers for security.

BTS’s RM features that will make you melt in love

EXO’s Chen touches fans with lyrics and MV for Hello

Jimin excites ARMY after revealing new details of “BE”

Two Films in Phase 4 of the Marvel Cinematic Universe Will...

Jimin has a coffee every ARMY would like to try

Dua Lipa is Criticized For Throwing Tickets At a Dancer