Home Entertainment Sound! Euphonium: What to expect from season 3 (according to ranobe) 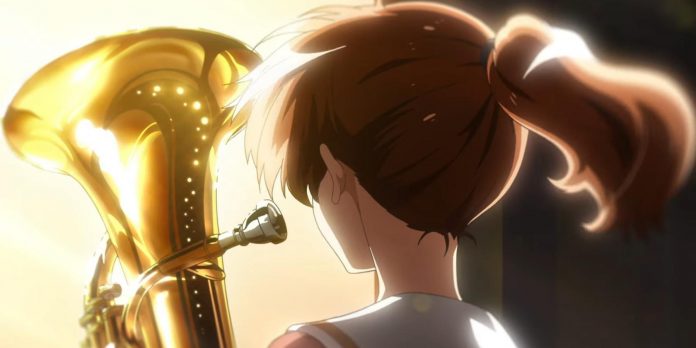 Sound! Euphonium has released information regarding the upcoming third season as well as an OVA film. Sound! Euphonium will continue to be produced by the same studio as the previous seasons, Kyoto Animations, which is known for popular anime such as A Silent Voice, the Netflix Original anime Violet Evergarden, and Miss Kobayashi’s Dragon Maid.

Based on a light novel series of the same name by Ayano Takeda., Sound! Euphonium tells the story of a fluffy-haired protagonist named Kumiko Oumae, who starts off the series trying to distance herself from her musical past. She played the euphonium, a brass instrument known as the leading instrument in the tenor-bass range in regards to military bands, in ensemble competitions in the past. After a rocky result and falling out with a bandmate at her last ensemble competition, she decides to focus on her life apart from music. Sound! Euphonium is a coming-of-age story that explores many sides of the world of ensemble bands, repairing friendships, and striving for difficult goals together. The first season premiered in 2015, and the second in 2016, along with multiple spin-offs throughout the years. Many of Kyoto Animation’s productions were slowed or halted after the July 2019 arson attack on the infamous studio.

RELATED: Cells At Work: Putting A New Spin on Slice Of Life

The first season starts with Kumiko trying to distance herself from her past in-band ensemble competitions. She begins her first year of high school by making new friends and avoiding contact with former friends from the past. However, both of the new friends she makes become interested in the ensemble band at the high school and convince her to join. A former friend named Reina Kousaka whom she lost during her last ensemble competition also joins the band at her high school, and along with that, the high school’s band plans to get into nationals despite never having succeeded in making it before.

Kumiko must now train with the inexperienced ensemble and repair her relationship with Reina, while rediscovering her love and passion for music again. Season one focuses on these struggles during her first year as a high school student. Along with the first season, there were extra previously unreleased shorts that are compiled together for the Blu-Ray release of season one, as well as a full unreleased episode that takes place in between the auditions and final performance of the first season.

RELATED: Is It Wrong to Try to Pick Up Girls in a Dungeon?: What to Expect From Season 4 (According to the Light Novel)

Season two focuses on the characters from season one preparing for their next performance following a qualifying round for the Kansai regional competition. Wanting to keep up with band practice, the group participates in a summer camp run by their band director as well as his friends who make a living with careers in music. However, the group is concerned with their future when a past member of the ensemble band wants to join again, a girl named Natsuki Nakagawa and many of the second-year members are not pleased with the new addition to the ensemble. Despite this, Kumiko and her friends are still determined to make it to nationals and band together to make sure their goal is realized.

A movie was also released based on side characters from the first two seasons called Liz and the Blue Bird that follows Mizore Yoroizuka and Nozomi Kasaki, who are preparing to play a piece based off of a fairy tale the title is based on. Through rehearsals, the two slowly grow apart, and the girls struggle to relate to the characters their role in the ensemble represents. The film has won the Noburou Oofuji award for creative expression during the 73rd Mainichi Film Awards. Another movie was released in 2019, and covers parts one and two of Sound! Euphonium: Kitauji High School Concert Band, Second Turbulent Movement. Both Kumiko and Tomoe, a supporting character from previous seasons, become the club presidents as well.

The film focuses on the differences between the first-year and the second-year students, learning to work together to succeed despite the quarrels and tension that arise. It also covers, as the rest of the series has, the ensemble’s attempts to participate in the national competition they have been working towards for the entire series, specifically at the regional stage.

What Can Fans Expect From Season Three?

A trailer was released on June 4th, 2022. This trailer, featured below, confirms that the third season will focus on Kumiko’s third and final year of high school, and therefore is confirmed to adapt at least one of the two Sound! Euphonium: The Kitauji Concert Band’s Decisive Final Movement novels.

Although season three itself is confirmed to release in 2024, there is also another OVA film announced for 2023. Reportedly the OVA film will cover the “Ensemble Contest Arc” and will release theatrically and on Blu-Ray disc around the same time as each other.

As the third season is confirmed to take place during Kumiko’s third and final year of high school, which are detailed in the final two light novels, we can assume the third season will follow the events of such. There are no English translations of the final two light novels professionally, and the fan-translated version is only partially finished, so little information is out on the exact contents of the novel itself for English speakers.

Looking at what little is out regarding the fan-translated portions of the light novel, it will begin with preparations for the group’s third Sunrise Festival, a fictional festival in which multiple high schools from the light novel series perform. Part of the third-year plot line has been adapted through the film Liz and the Blue Bird, however, this is a side-story and doesn’t provide context for the main plot the trailer is hinting towards.

SAGA Will Have An Online Event to Celebrate Nerd Pride Day