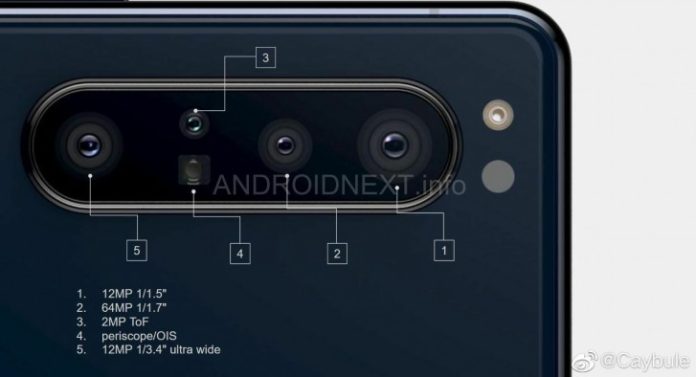 The flagship Xperia 1.1, which is among the smartphones to be released by Sony, comes with a powerful camera setup. According to the news, the new device will feature 2 12 MP cameras and 2 MP ToF sensors.

Sony is expected to introduce new smartphones in the WMC 2020. These devices will also include the company’s new flagship phone. The name of the device, previously said to be Xperia 5 Plus, has been changed to Xperia 1.1 based on new news. It is stated that the new Xperia will have a powerful camera system.

The release date of Xperia 1.1 will be announced on February 24:
It is stated that both 12 MP cameras have large sensors. One of these cameras is at the top and the other is at the bottom. The 64 MP teleobjective camera is in the same row as the top camera. This camera is thought to be used to zoom images up to 5x. Everything else will be done by the periscope camera. The last sensor is the 2 MP ToF camera.

While there are speakers on the front of the device, there is a front camera on the right side of the front panel. On the back of the Xperia 1.1, 5 cameras are lined up vertically. Only the periscope camera and ToF camera come side by side. Sony is said to hold a press conference on February 24 and announce the launch date of its flagship.

It is seen that Sony also adheres to the 21: 9 aspect ratio on the Xperia 1.1 model. The smartphone, which is specified to come with a 6.6-inch OLED display, has two speakers in front of it. It is estimated that the Sony Xperia 1.1 will be 168.2 x 71.6 x 8.1 mm. The thickness of the phone and the camera protrusion also increases to 9.3 mm when it comes into play.

The fingerprint reader of the device, located at the top of the headphone jack, is located on the side panel. We will follow the announcements about the device anbean and share them with you. Stay tuned to avoid missing.