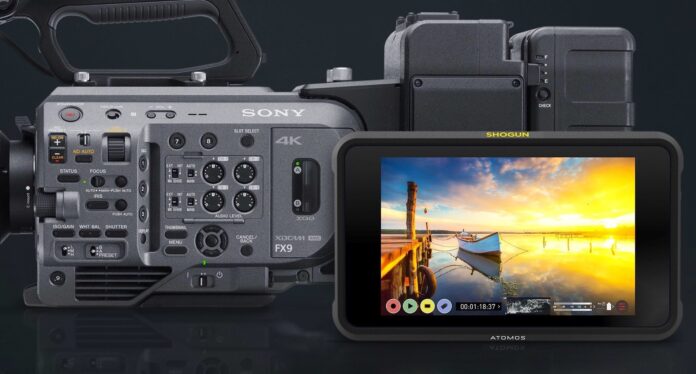 Sony made a statement on how to record the RAW signal from Sony FX9, which it released in September 2019. Accordingly, XDCA-FX9 Expansion Unit and Atomos Shogun 7 are required for registration. Thus, Sony has been included in the ProRes RAW ecosystem.

Sony finally made a detailed explanation of how to record the RAW signal from the full-frame video camera Sony FX9. When FX9 was released in September 2019, Sony had the good news that a near-future firmware update could achieve 16 bit 4K RAW output up to 60 fps and 2K RAW output up to 120 fps. However, printing 16 bit RAW and recording it are different.

At the time of this announcement, a recorder capable of recording 16 bit signals from FX9 was not available on the market. Even Sony’s $ 6,980 AXS-R7 External 4K Recorder was not working with the required XDCA-FX9 Expansion Unit. Now it has been announced that the Atomos Shogun 7 is needed with the XDCA-FX9 Expansion Unit to record RAW.

In the first place, Atomos Shogun 7; Apple ProRes from the FX9 and XDCA-FX9 Expansion Unit will record RAW images up to DCI 4Kp60 or DCI 2Kp180. Recording on SDI from FX9 with Shogun 7 will improve FX9’s performance. This will be done by taking RAW data from the camera’s sensor and saving them in ProRes RAW format.

Atomos CEO Jeromy Young expressed his pleasure in incorporating Sony FX9 into the large and growing ProRes RAW ecosystem. Noting that in the first place, there are 4Kp60 and 2Kp180 ProRes RAW recording options, Young added that they are constantly improving their product capacities to support their partners such as Sony. Young also noted that he was excited to work with the team at Sony.