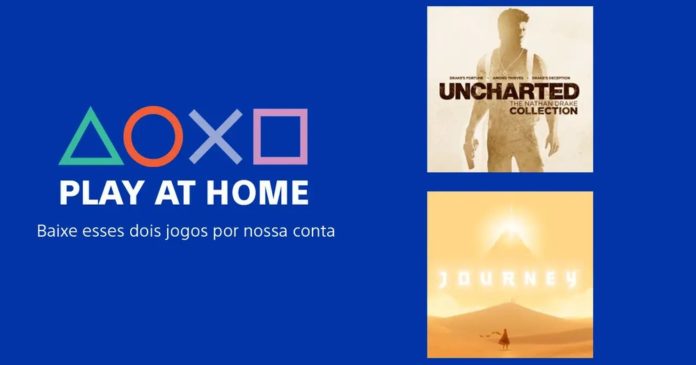 Sony released the Play At Home initiative in an official post on its blog this Monday (14). The program provides two free games to PlayStation 4 (PS4) users, and creates a $ 10 million fund ($ 51.8 million in direct conversion, excluding taxes) to support small developers and studios during the isolation against the new coronavirus (Covid-19). Seeking to encourage quarantine, the company will grant free access to Uncharted: The Nathan Drake Collection and Journey titles for nearly three weeks, from April 16 to May 5. PS4 users can download games for free from the console’s online store.

Games
One of the games released for download by Play at Home is actually a Naughty Dog collection that brings together the first three games in the Uncharted franchise. The Nathan Drake Collection box was released in 2015 exclusively for the PS4 and contains the titles Uncharted Drake’s Fortune, Uncharted Among Thieves and Uncharted Drake’s Deception. The games promise an immersion in the world of Nathan Drake, a treasure hunter who ventures through different locations, meeting real and fictional characters along the way. TechTudo has a review of the Uncharted collection.

Journey, the other title that is free until May 5, is a highly successful franchise, released exclusively for Sony consoles. The game is a metaphor about, precisely, isolation. The player controls a silent and expressionless creature that wakes up in a desert region, marked only by a hill with an intense glow on its summit. The journey begins towards the light, with striking graphics and simple challenges, which will guide the narrative. TechTudo has already published a review on Journey.

Creative Background
Sony’s initiative also opens a $ 10 million fund for studios and independent developers who are having a hard time due to quarantine. The amount corresponds to R $ 51.8 million, in direct conversion and without tax deduction. The company promised to release more information, such as participation criteria, soon.

Galaxy S20 Tactical Edition is introduced! Here are the features