Home Entertainment Sons of Anarchy: Why Wendy got custody of Jax’s Children (and not... 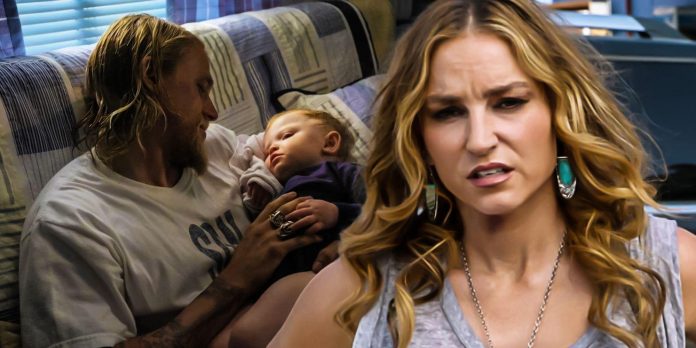 The Sons of Anarchy saw Jax and his wife Tara doing everything possible to keep their sons safe, and Tara went so far as to arrange everything in case she or Jax wasn’t around to raise Abel and Thomas, and decided to transfer custody of her son. The children of Wendy, Jax’s ex-wife, but why did she choose Wendy over her boss and close friend Margaret? “Sons of Anarchy” transported viewers to the fictional town of Charming in California to meet with the titular motorcycle club and follow its members through many problems — inside the club, with other groups and in their personal lives.
Sons of Anarchy is led by Jackson “Jax” Teller (Charlie Hunnam), the club’s vice president and the son of John “JT” Teller, one of the club’s founders. Sons of Anarchy begins when Jax finds JT’s manifesto, in which he shared his ideas and views on the club, which were very different from the views of the current president of the club (and Jax’s stepfather) Clay Morrow (Ron Perlman). This and other problems led to a large number of tragedies in “Sons of Anarchy”, when some of the most beloved characters of the series met a tragic end, for example, Tara Knowles (Maggie Siff) and even Jax himself.
Related: Sons of Anarchy: Why Jax was Killed in the Series Finale
Tara was a school friend of Jax’s who left town when Jax was 19 and returned ten years later. Tara reunited with Jax in the first season of Sons of Anarchy after the birth of Jax and Wendy’s (Drea de Matteo) son, Abel. Between seasons 3 and 4, Jax and Tara had a son, Thomas, and in season 5 of Sons of Anarchy, they got married. However, in the following season, Tara and Jax’s relationship deteriorated as she was arrested for conspiracy to commit murder, prompting her to come up with a plan to ensure the safety of her children. Tara gave custody of Abel and Thomas to Wendy rather than her boss and close friend Margaret Murphy (McNally Sagal), which seemed like the best option considering how well she knew the criminal life and the many dangers in it and would have made it better to keep the children away from such a lifestyle, but in the end, Wendy was definitely the best option.
Sons of Anarchy: Why Wendy Was the Best Option for Taking Care of Jax’s Kids
Wendy Case debuted in the first episode of Sons of Anarchy, and she was a recovering drug addict, Jax’s wife, and was pregnant with Abel, although she continued to use drugs during pregnancy. This led to Abel being born prematurely and with a rupture in his stomach, and in season 2 Wendy left Charming and went to rehab, returning in season 4 of Sons of Anarchy fully recovered and wanting to reunite with Abel, although Jax and Tara did not. t let her. This changed radically in season 6 of Sons of Anarchy, when Tara came up with an elaborate plan to get Wendy full custody of Abel and Thomas. However, Margaret Murphy seemed suitable to get custody of Abel and Thomas, even if she was not related to them, as she helped Tara ensure the safety of the children during season 6 and knew well the dangers of living outside the law and how to stay away from them. how she was once involved in this.
Although both Wendy and Margaret were able to protect Abel and Thomas, Wendy was the best option despite having a difficult past. Wendy, like Margaret, was also well aware of the life of crime and the many dangers associated with it, and she was smart and strong enough to seek help and stay sober to be a part of Abel’s life. Wendy proved to Tara that she is a caring and loving mother, and Tara believed that she would keep Jax’s children away from SAMCRO and their lifestyle. Sons of Anarchy creator Kurt Sutter defended his decision to have Wendy get custody of Abel and Thomas instead of Margaret, saying she “knew the pain and destruction of life,” and Tara knew she would protect the children—and ultimately, “for better or for better.” worse, Wendy was family.” While Margaret would definitely take care of Jax and Tara’s children and protect them, Wendy turned out to be the best option as she already had a connection with them and she left the Charm with them and Nero Padilla (Jimmy Smits) at the end of Sons of Anarchy.  allowing them to start a new life together.

The worst mistake in the remake of “A Nightmare on Elm...